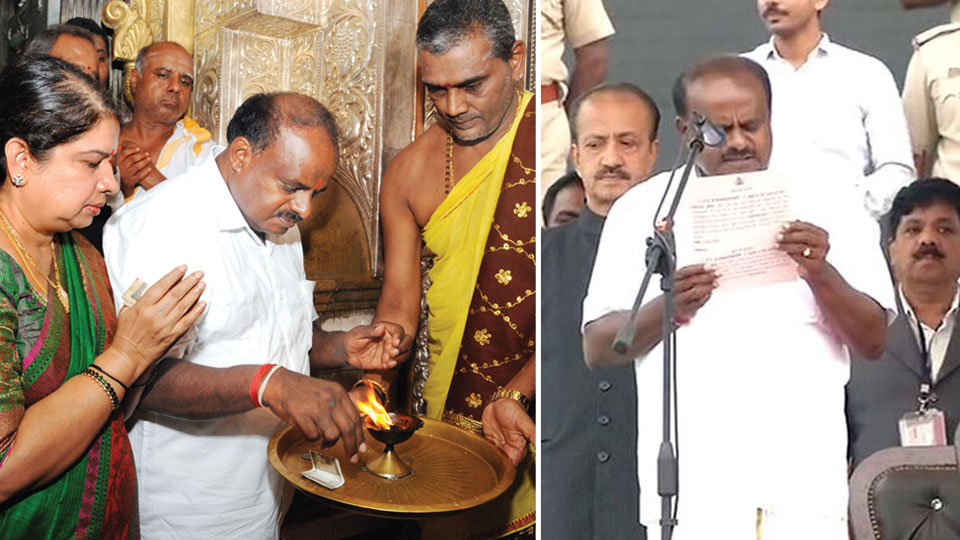 Mysuru:  After standing testimony to a high-pitched and bitter election campaign, the State will witness the second swearing-in ceremony in less than a week when Chief Minister-designate H.D. Kumaraswamy of the JD(S) will take oath on the flight of stairs of the Vidhana Soudha at 4.30 pm today. He will assume office along with Deputy Chief Minister Dr. G. Parameshwara of the Congress and run a coalition government.

Ahead of his swearing-in ceremony, Kumaraswamy visited the Chamundeshwari Temple atop the Chamundi Hill this morning. He arrived in a chartered helicopter at the Lalitha Mahal Helipad at around 10.11 am (delayed by over two hours) and drove to Chamundi Temple and reached there  at 10.45 am.

Dressed in white shirt, white dhoti with a gold-colour border, the CM-designate along with his wife Anitha Kumaraswamy was given a Poorna Kumbha welcome with supporters and party workers shouting slogans hailing the new Chief Minister. Kumaraswamy and Anitha entered the sanctum sanctorum of the temple and performed special pujas to the Goddess. The rituals were performed by Chamundi Temple Chief Priest Dr. Shashishekar Dikshit.

Inside the temple, the family of Chamundeshwari MLA G.T. Devegowda presented Ambari-laden silver elephant figurine to the Kumaraswamy couple. Devegowda’s wife Lalitha and son G.D. Harish Gowda were present. Kumaraswamy also offered prayers to Mahabaleshwara Temple atop the Chamundi Hill. Usually VVIPs who come to the Hill Temple perform pujas only to Goddess Chamundeshwari and leave the venue. Kumaraswamy broke the tradition today and followed the practice of performing pujas to Mahabaleshwara.

Addressing reporters, Kumaraswamy said that he had began his election campaign and had launched his campaign vehicle “Vikasa Vahini” from the Chamundi Temple and he had come here to pray to the Goddess as part of the sankalpa for making him the Chief Minister. “I believe in Goddess Chamundeshwari, Sringeri Sharadambe and our family deity Lord Shiva. I staunchly believe that without divine intervention, my becoming the CM was impossible,” he said. 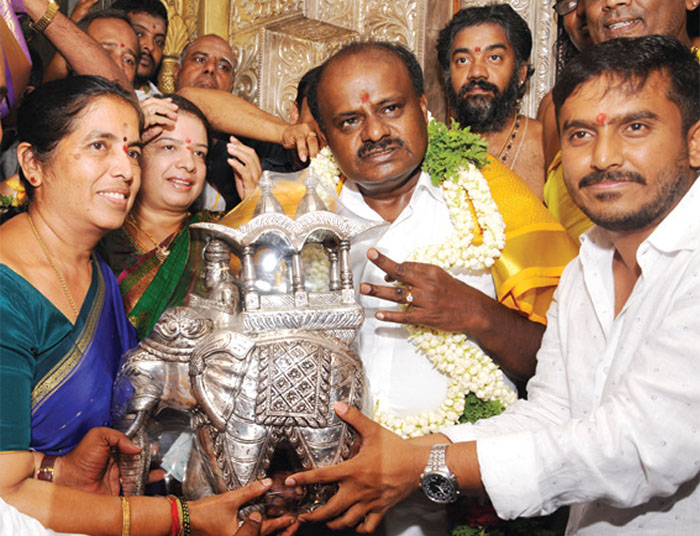 On the nitty-gritty of his government, he said that he will take his coalition partner Congress before taking any policy decision.

“I am everybody’s CM and please don’t limit me to a particular caste,” he said.

On the likelihood of him reneging on the promise of farmers’ loan waiver, he said that he will not take a U Turn. “I am committed to waive the loans after seeing the financial health of the State and after discussing the issues with Congress. But I want to assure the farmers today that they need not fear about repaying loans,” he said.

On his accessibility after becoming the CM, Kumaraswamy said that the doors are always open for anyone who has a grievance. “Even a manual labourer can come and see me and Vidhana Soudha will be open to all. People can come to my house and meet me. I will keep the doors open from 6 am,” he said.

At the Helipad too, Kumaraswamy spoke to reporters and said that he would provide an honest government and his priority would be to rescue farmers from distress. “I very well know that I will be performing a balancing act every day. Both Congress and JD(S) will form a Common Minimum Programme and there will be a coordination committee to guide the government,” he said.

After his visit to Chamundeshwari Temple, Kumaraswamy and Anitha Kumaraswamy drove to Suttur Mutt at the foot of Chamundi Hill and sought the blessings of Suttur Seer Sri Shivarathri Deshikendra Swamiji. Kumaraswamy later flew to Ramanagaram and from there, he will reach Bengaluru.