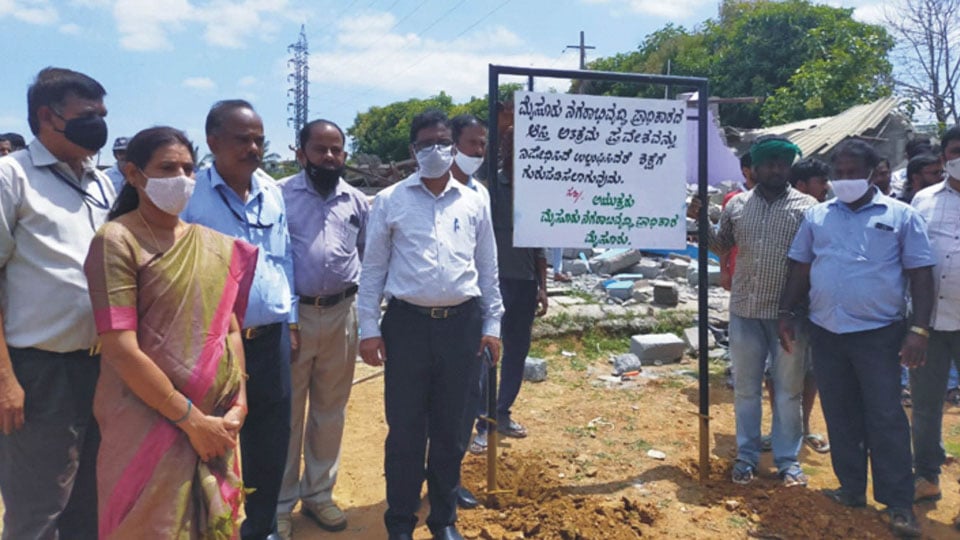 Mysore/Mysuru: In yet another reclamation drive in recent days, MUDA (Mysuru Urban Development Authority) officials last week reclaimed 24 guntas of land at Hanchya village in the taluk, which was usurped by land sharks after creating fake documents.

MUDA had acquired 24 guntas of land coming under Survey Nos. 274/1 and 274/2 of Hanchya village for forming a  residential layout, after paying compensation to the land owners. But some landsharks had usurped the said land after creating fake documents and a building was also built on the land. But MUDA authorities upon coming to know of it, razed down the structure and reclaimed the land that is currently valued at about Rs.15 crore.

In another operation, MUDA reclaimed prime land worth crores of rupees in Vijayanagar Second Stage. The city’s Mahadeshwara Housing Co-operative Society had developed 13 sites and constructed three buildings unauthorisedly on  a parcel of land belonging to MUDA coming under Survey Nos.120 and 121/2 of Hinkal village, that forms part of Vijayanagar Second Stage. The authorities, upon coming to know of it, reclaimed the land and erected a board at the site mentioning that the land belonged to MUDA.

Also, notices have been served to the occupants of the three buildings asking them to pay a monthly rent of Rs.3 lakh to MUDA commencing from Sept. 1, 2020, according to MUDA Commissioner Dr. D.B. Natesh.