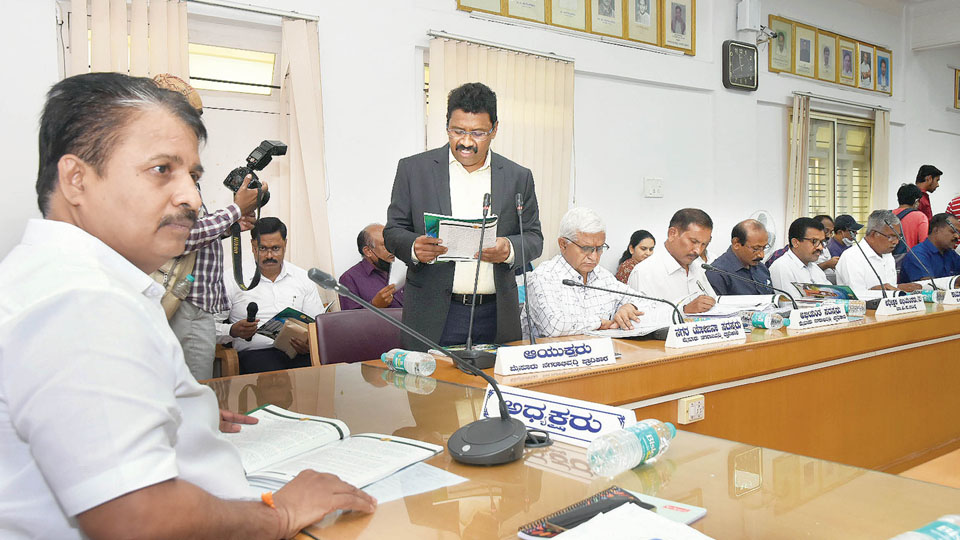 Mysore/Mysuru: The Mysuru Urban Development Authority (MUDA) presented a surplus budget of Rs. 129.76 crore for 2022-2023. The Budget was read out by MUDA Commissioner Dr. D.B. Natesh in the Budget Meeting chaired by MUDA Chairman H.V. Rajeev in the presence of MUDA members this morning.

In the above three places, MUDA is planning to acquire 437 acres and form 7,676 sites and Rs. 262 crore has been set aside. In the present budget, Rs. 60 crore has been earmarked for the preparation of a Detailed Project Report (DPR) and also to provide basic facilities in the layouts after the land is acquired.

Several landowners have expressed their willingness to hand over the land to MUDA and as an encouragement, Rs. 10 lakh per acre will be paid to the landowners, subject to repayment conditions.

R.T. Nagar Road to be extended

The budget proposes the extension of the 30-mts road that has been built in R.T. Nagar and to link it to Mooganahundi. As of now, the R.T. Nagar Layout reaches a dead end and there are not many takers to the roads here as the roads do not link with each other.

If the road is extended, an easy link can be provided to Mooganahundi, K. Salundi, Nanjarajaiahanahundi and Ramanahundi. Also, if the road is developed, all the private layouts around R.T. Nagar can get connectivity and there will be more demand for MUDA layouts, the budget said.

In the last two years, MUDA has recovered 77.01 acres of land that had been encroached upon by various private individuals and establishments. This was realised after the encroached land was identified and followed by stringent legal action.

Now the MUDA is planning to introduce group housing schemes on these lands that have been cleared of all encroachments. Rs. 5 crore has been set aside to provide road connections to the land and also build compound walls around the land so that there is no further encroachment.

These will be built in honour of the Mysore Wadiyars and opinions will be taken from the public and from the National Highways Authority of India, Public Works Department and the Department of Rural Development and Panchayat Raj.

Will it be Neo Metro, Metro Lite or Metro for Mysuru?

Mysuru is likely to become one of the Tier-2 cities in India to have a Metro Neo corridor, a rail-guided mass urban transport system with rubber-tyre electric coaches powered by an overhead traction system running on elevated or at-grade sections.

In 2020, Finance Minister Nirmala Sitharaman had stated that Metro Lite and Metro Neo technologies will be deployed to provide metro rail systems in Tier-2 cities and peripheral areas of Tier-1 cities at much lesser costs with the same experience and safety of a Metro Rail.