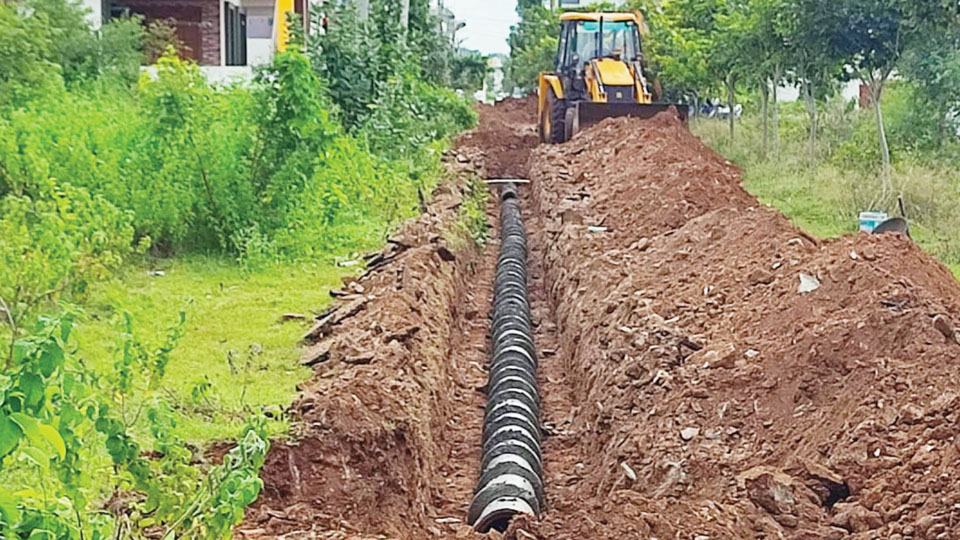 Mysore/Mysuru: Upset over MUDA’s unscientific works, the residents of Vasanthnagar have taken officials to task for improper laying of underground pipelines in the area.

Following rampant representations by the residents to take up Civic infrastructure works in the layout, the MUDA launched underground drainage works. But residents have started complaining that the work is being carried out in an unscientific manner as the pipeline is laid just one and half feet beneath the ground, when actually the depth should be more than five feet. The residents argue that laying of pipes just beneath the ground does not serve the purpose as the pipelines are always under the threat of getting broken if a heavy vehicle passes over the stretch. Disappointed over the lackadaisical attitude of officials, the residents have urged the MUDA authorities to ensure that pipes are laid at least five feet underneath the ground as that would be safe and secure against any damages.

Girish, a resident, alleged that though the officials have been explained about the risks of laying underground pipes just beneath the ground, the MUDA engineers have been insisting that what is currently being done is right and the norms are followed. Accusing MUDA officials of being hand in glove with the Contractor, they wanted MUDA to stop the works and take action against the Contractor and Engineers for their irresponsible and unscientific execution of works.