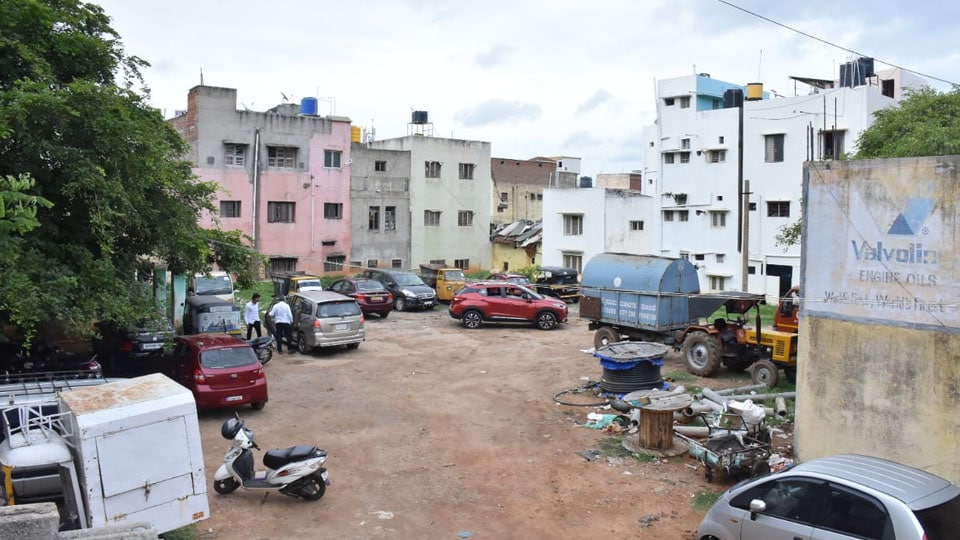 Mysore/Mysuru: The  Mysuru City Corporation’s (MCC) move to construct a multi-level parking lot at Gaadi Chowk on Bidaram Krishnappa Mandir Road in the heart of the city has met with severe opposition from local residents and building owners in the vicinity.

The Bidaram Krishnappa Mandir Road, which is close to Narayana Shastry Road, is comparatively a narrow stretch. The MCC’s move to construct a multi-level parking lot along this road (at Gaadi Chowk), which comes under MCC Ward No.23, has been severely objected to by local residents who complain that the parking lot will pose a big hurdle for their safe movement and to shops in the vicinity. The residents question the MCC’s motive of choosing the busy and buzzing area of Gaadi Chowk to build a multi-level vehicle parking lot.

Sachin, a local resident told ‘Star of Mysore’ that a school building constructed in one-acre area of Gaadi Chowk was inaugurated by the then Urban Development Minister V.S. Krishna Iyer in  August, 1984. However, after some years, the school was evacuated and the building was used as night shelter for destitutes and the homeless. But with the passage of time, the building became dilapidated following which the shelter home was shut. Later, the MCC planned to construct the multi-level parking lot in this one-acre land. However, the local residents are of the opinion that construction of a parking lot in this space will not be of much help in solving the vehicle parking problem. Also, the parking lot instead of becoming a boon will be a bane for them, they said and urged the MCC to drop the plan.

With the space lying vacant for now, the public are using it as a garbage dumping yard. As such, the Gaadi Chowk area has become a nuisance for pedestrians and motorists as foul smell has been emanating from the dumped wastes and garbage. The entire area lacks even a semblance of hygiene and cleanliness. On one side of the area, the MCC has been using the space for parking only a few of its vehicles, while the rest of the space is occupied by private vehicles. The residents complain that there would have been no hygiene and cleanliness problem in the area had the MCC utilised the space in an appropriate manner.

Upset with the MCC’s move to construct a multi-level parking lot, the local residents have demanded the MCC to create a Children’s Park in the one-acre space. Pointing out that MCC Ward 23 has no park other than the Freedom Fighters Park in Subbarayanakere Grounds, they say that a park is more needed for them than the parking lot. The creation of a park will put a full stop for dumping of wastes and garbage, besides becoming a venue for the people to jog and do physical exercises and also a play station for kids. This apart, the area can become free of the menace of alcoholics, they explain.

On the other hand, local residents have been constantly demanding creation of a Children’s Park at the spot. Taking note of the majority public opinion, she raised the issue at the MCC budget meeting, during which she pressed for creation of a park in the area, she pointed out.