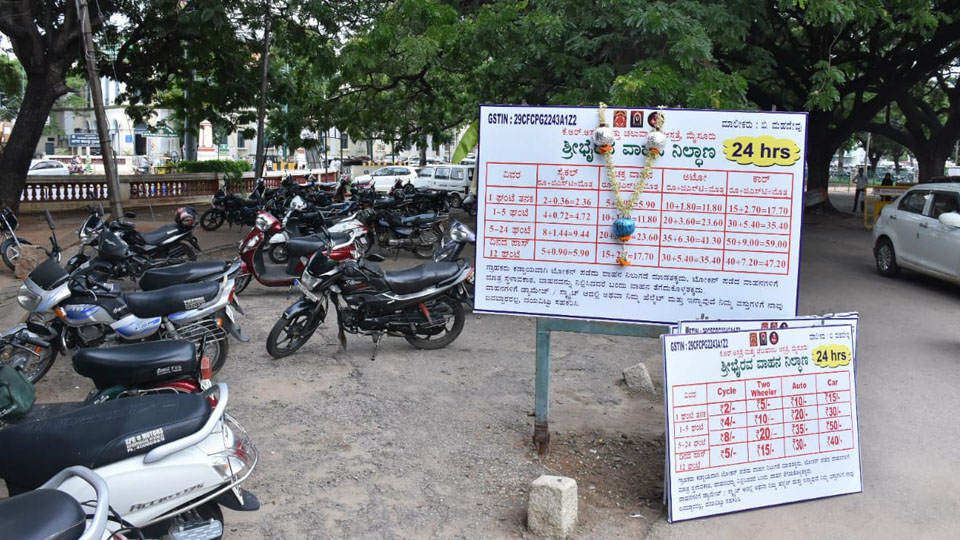 Mysore/Mysuru: In a bid to prevent misuse of its vacant spaces, the K.R. Hopsital has launched ‘Pay and Park’ vehicle parking facility at its premises. Earlier, the Hospital had no parking fee.

With the launch of the parking facility, those coming to K.R. Hospital and Cheluvamba Hospital, have to park their vehicles at the designated parking lot and pay the stipulated parking fee.

One B. Mahadevu of Bhyrava Vehicle Parking Contract Agency, has bagged the tender for operating the parking lot in K.R. Hospital premises. The K.R. Hospital authorities have fixed the parking fee for different type of vehicles based on the duration of parking, according to which the fee for cycle parking is Rs. 2 for the first hour, Rs. 4 for 1 to 5 hours and Rs. 8 for 5 to 24 hours.

A pass facility is also available for frequent visitors to the Hospital on a single day. The multiple-entry pass fee for cycles is Rs. 5, for two-wheelers Rs. 15, for autos Rs. 30 and for four-wheelers Rs. 40. The pass holders can move in and out of the Hospital with their vehicles any number of times on that particular day. The parking free board mentions the GST number of the parking contractor and also carries a caution in bold, which says that the contractor cannot be held liable for any damage or theft of any belongings, the vehicle owners may have left behind after parking their vehicle.

With the launch of the ‘Pay and Park’ facility, many poor patients visiting the K.R. Hospital are unhappy with the decision of the authorities. Maintaining that most of the patients visiting the Hospital are poor and cannot afford to pay parking fees, they are of the opinion that when they are able to get treatment and also medicines for just Rs.10, the collection of parking fee is not correct. They also say that the Hospital, which is famous as ‘Doddaspatre’ among the rural folk, is most visited by poor patients and as such collection of vehicle parking fee is a burden for them, especially when they get admitted or have to wait for long on some occasions. Claiming that most of the poor patients come to the hospital in the vehicles of others or autos, they complained that demanding additional fee for just a few minutes beyond one hour is disappointing.

Even as poor patients are complaining, some other patients are of the opinion that the ‘Pay and Park’ initiative is a right idea. Maintaining that the Hospital premises was being rampantly misused as many people who go to neighbouring places such as Irwin Road, K.T. Street, Railway Station, Bus Stand and other prominent business places in the heart of the city, used to park their vehicles in the K.R. Hospital premises as parking was hitherto free and also there was security at the entry gate, they opined that the Hospital authorities, though belatedly, have taken the right decision to launch ‘Pay and Park’ facility in order to stop such misuse.

Meanwhile, the Hospital authorities defended the decision, saying that the rampant misuse of the vacant spaces in the Hospital premises deprived the patients and their attendants of vehicle parking space. Noting that with haphazard parking of vehicles, a few vehicles thefts too were being reported from the premises, despite security, they said that the parking fee collection was introduced based on a Government directive. The ‘Pay and Park’ facility is existent in almost all other Hospitals attached to Government Medical Colleges across the State and this action is also aimed at putting a stop to unauthorised parking of vehicles in the hospital premises, they added.