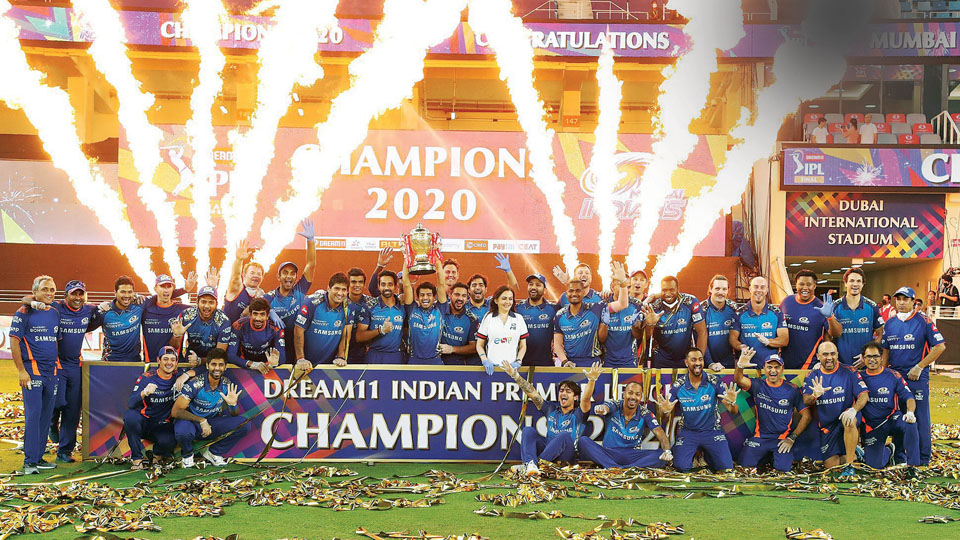 Rohit Sharma led from the front while Trent Boult starred with the ball as Mumbai Indians (MI) beat Delhi Capitals (DC) by five wickets in the Indian Premier League (IPL) 2020 final in Dubai yesterday and clinched their fifth IPL title. With this win, MI became second team in the IPL history to successfully defend the title after Chennai Super Kings (CSK) achieved the feat in 2010 and 2011.

Needing 157 runs to win the final, MI were off to a flying start as Rohit, who completed 4,000 IPL runs for MI, and Quinton de Kock attacked from the word go, taking MI to 45/0 after 4 overs.

However, their partnership was broken after de Kock was dismissed by Marcus Stoinis.

Suryakumar Yadav replaced de Kock in the middle and announced his arrival in style, creaming a four and a six on the first two balls he faced before MI marched to 61/1 after the end of powerplay.

While DC bowled two tight overs, Rohit went after Pravin Dubey in the ninth over, hitting the leg-spinner for two sixes. The MI skipper then completed 3,000 IPL runs as captain as MI moved closer to 90 at the halfway stage of the chase. MI though lost Surya in the 11th over following a mix-up in the middle with Rohit.

Rohit then notched up his third half-century of the season and took MI past the hundred-run mark in the 12th over. Ishan, who had joined Rohit in the middle after Surya’s fall, continued his good run of form as he zoomed to 26 off 15 balls at the end of the 16th over. While Anrich Nortje and Kagiso Rabada picked three wickets, including that of Rohit, Ishan Kishan took the team home with 8 balls to spare.

Earlier, MI made one change to their playing XI as Jayant Yadav replaced Rahul Chahar. Meanwhile, DC retained the team which took the field in Qualifier 2.

MI were off to a cracking start as Trent Boult struck on the first ball, dismissing Marcus Stoinis, who edged one to the wicket-keeper. The left-arm pacer picked his second wicket in his next over as Ajinkya Rahane was strangled down the leg side.

MI introduced spin into the attack in the fourth over and the move worked straightway as Jayant Yadav got Shikhar Dhawan out after the left-hander missed his slog-sweep.

DC needed Shreyas Iyer and Rishabh Pant to do a rebuilding job and the two delivered when their team needed it in the all-important final.

While Iyer got a life in the sixth over after Ishan Kishan, despite his brilliant effort in the field, could not complete a difficult catch, he and Pant took DC past 40. The two added 18 runs in the next three overs before Pant clobbered two sixes off Krunal Pandya as the two completed a 50-run stand, taking DC closer to 80 after the end of 10 overs.

DC brought up their hundred in the 14th over before Pant completed a fine counter-attacking fifty in the next over. However, the DC wicket-keeper got out in the same over after being holed out at fine-leg off Nathan Coulter-Nile’s over.

Two overs later, Iyer hit two fours and completed his third fifty of the season before Boult, bowling his final over of the night, picked his third wicket of the match, dismissing Shimron Hetmyer. While Iyer remained not out on 65, DC eventually posted 156/7 on the board.