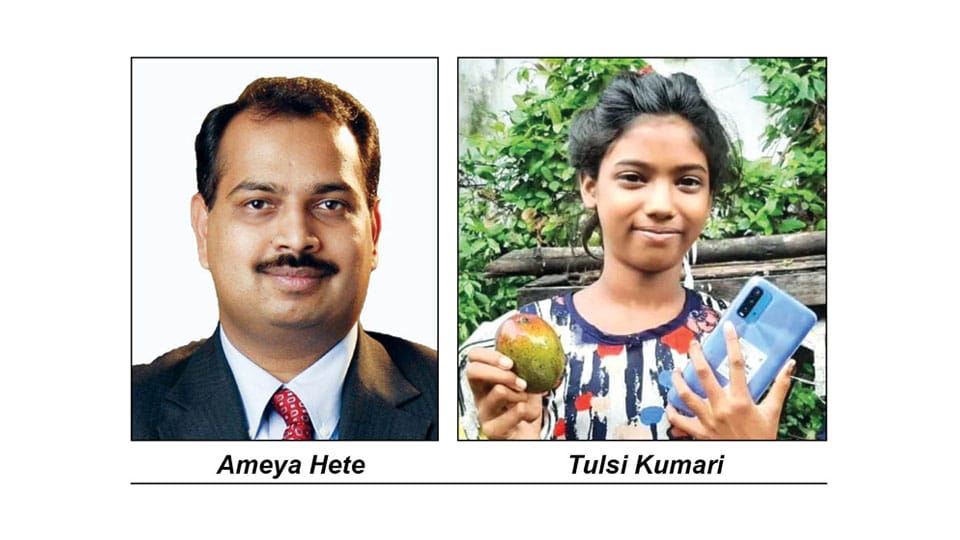 Mumbai: An ‘uncle’ from Mumbai helped an 11-year-old girl from Jamshedpur to pursue her dreams of buying a smartphone and attend online classes.

Tulsi Kumari, who sells mangoes by the roadside, was left in shock when a certain Ameya Hete bought 12 mangoes from her worth Rs. 1,20,000, paying Rs. 10,000 for each mango. The money was transferred to her father Srimal Kumar’s account on Wednesday.

Hete, the Managing Director, Valuable Edutainment Private Ltd., learnt about the struggles of the young girl who very recently spoke to the local media about the financial crisis that is not allowing her to buy a smartphone and attend classes online. Besides, he has given Kumari a mobile phone worth Rs. 13,000 and Internet recharge throughout the year thus ensuring that there would be no interruption in the education of the girl child.

Kumari, a fifth-grader, attended a Government School that shut down following the Coronavirus pandemic and the ensuing lockdown. After receiving the lumpsum money, Kumari said that she sold mangoes to save money so that she can afford a smartphone, but now that she has the money, she can now attend classes online and continue her education, according to reports.

Hete, whose organisation facilitates virtual classes said that he didn’t quite don a charity by helping Kumari. He stated how she never asked for alms or gave up on her education and that endeavours inspired him to help the young woman in her educational pursuits.

The Coronavirus lockdown has caused a paradigm shift in classes and schooling and most operations have shifted online, deepening the digital divide in India. Last year, a domestic help’s son in Chennai was caught stealing a smartphone but later the Police Inspector gifted him one so that he can continue with his online classes.

The 13-year-old student from a Corporation School was compelled to take the step following desperation of attending online classes. His parents reportedly couldn’t afford a smartphone as his father works at a biscuit shop and this pushed the school student to embark on theft.

According to the Police, the boy came under the company of two boys from the same impoverished neighbourhood. The duo used the teenager as bait to steal a mobile phone. After seeing him loitering around during school hours, they decided to lure him with the idea of a smartphone so that he no more had to miss out on his online classes. Three of them then managed to steal the mobile phone of a truck driver in Thiruvottiyur and eventually all three of them were caught. However, the story took a turn towards empathy after the Police Inspector S. Bhuvaneshwari heard the boy’s need for a smartphone in order to continue with his education.

Jamshedpur Mango Mumbai Tulsi Kumari
Third wave of Coronavirus will not be as severe as second one: ICMR Study
Flowers Bloom at ‘Bapu’ Square