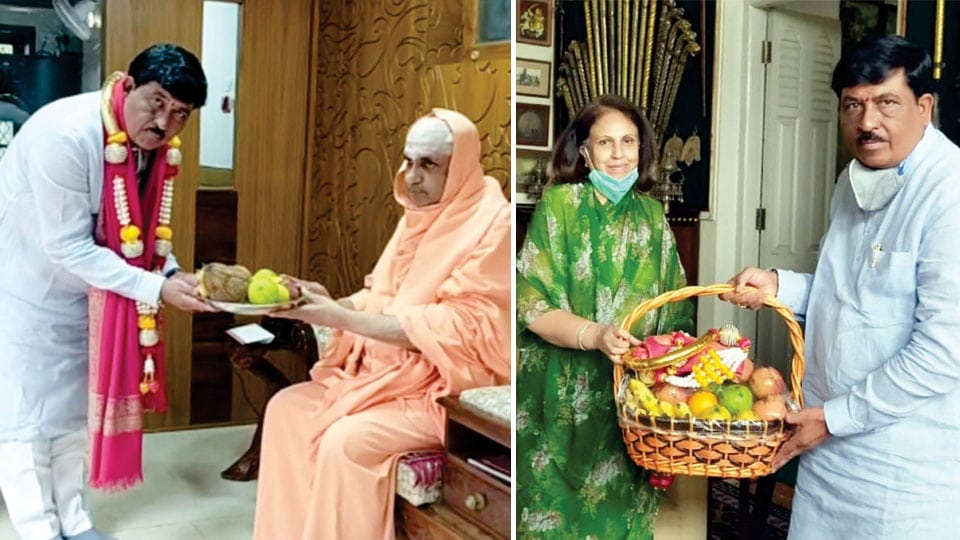 Mysore/Mysuru: Having set Aug. 11 as the date for re-opening of Pandavapura Sahakara Sakkare Karkhane (PSSK), BJP MLA from Bilgi Murugesh Nirani, Chairman of Nirani Sugars (MRN Group), which has taken over the Sugar factory on a 40-year lease from the Government, visited Suttur Mutt yesterday and invited Sri Shivarathri Deshikendra Swamiji for the ceremony. Nirani also visited the Mysore Palace and invited Pramoda Devi Wadiyar.

Later speaking to presspersons, Nirani said that he, as an Industrialist, has invited Suttur Seer and Pramoda Devi for the inaugural function at Pandavapura Sugar Factory on Aug. 11.

Stating that he will also invite all the 224 MLAs, Nirani, who is also a former Minister, said that farmers were not opposing the takeover and even JD(S) and Congress leaders too have extended their support.

Maintaining that local MLA C.S. Puttaraju too has looked upon him as a brother, he asserted that there will be no  hurdles for the re-opening.

Replying to a question on taking over Mandya’s MySugar Factory too, the MLA said that as an industrialist, he will take part in the tender whenever it is invited and no one in his party was opposed to it.

Claiming that he heads a Rs. 5,000 crore turnover Industrial Group, he asserted that he will stay in the BJP even if the party denies him the ticket in future polls.

Replying to a question on the visit of Deputy Chief Minister Laxman Savadi to New Delhi, he said  he does not know much about it as he is very much engaged in the preparations for the re-opening of Pandavapura Sugar Factory.

He further said that B.S.Yediyurappa will remain as the Chief Minister for the next 3 years.