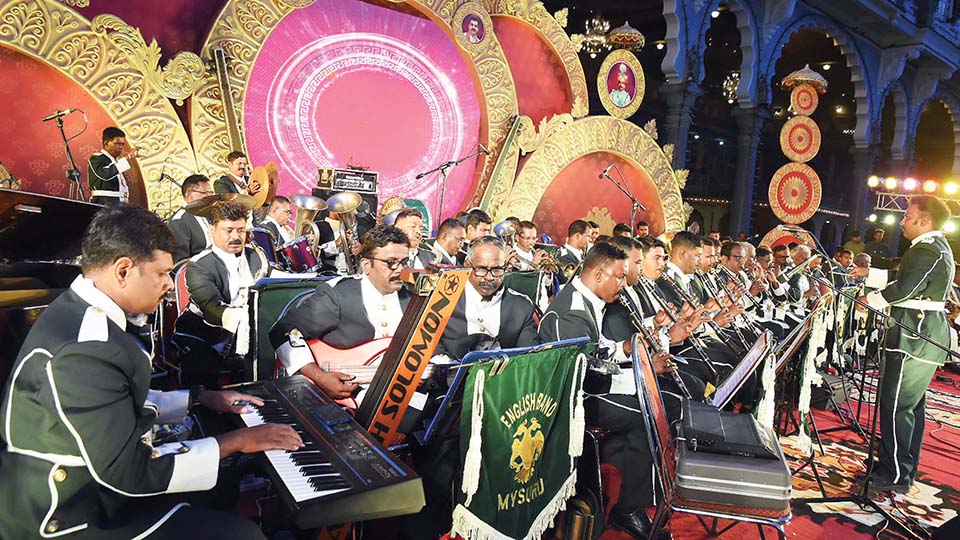 Mysuru: The fourth day of Dasara cultural programmes in the Mysore Palace premises saw World Music (Karnatak instruments), Vachanamrutha and Police Band regale the crowd last evening. Bengaluru’s ‘Chakrafonics’ troupe, headed by Pandit Praveen D. Rao presented ‘Vishwasangeetha’, a blend of Karnatak musical instruments, which sought to send a message to the world on the importance of Indian Music, earned a lot of appreciation from the crowd for its speciality.

Later, Dharwad’s Pandit Venkatesh Kumar presented ‘Vachana Gayana’ which seemed to take the audience to the world of Gods (Daivaloka).

Bengaluru’s Madhulita Mohapatra and team presented Odissi dance which left the audience spellbound. She performed to a song on Goddess Chamundeshwari ‘Jaya Jaya Chamundeshwari…’, which  described the killing of Demon  Mahishasura.

The English band team headed by A.C. Francis played songs from the super-hit Kannada film ‘KGF’ and the famous English song ‘Selection of ABBA’. This apart, a Jugalbandi performance entertained the gathering.

Actor and Rajya Sabha MP Jaggesh was the star attraction on Thursday.

Agriculture Minister B.C. Patil, District Minister S.T. Somashekar and others were present. The Ministers lauded the cultural richness of Mysuru and appreciated the teams for their sterling performances.