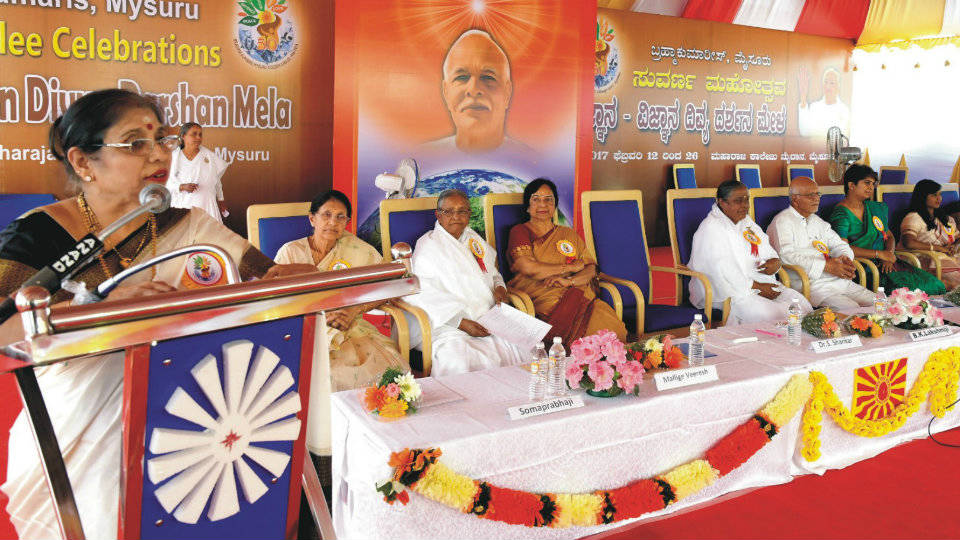 Mysuru, Feb.19(RKB&DM)- Expressing concern over the growing tendency among Indian women to follow western lifestyle and culture, Music University Vice-Chancellor Dr. Sarvamanagala Shankar said that the society should take a serious look at the issue.

She was speaking at the Convention ‘Women as Saviors of Culture’ organised by Prajapita Brahma Kumari Ishwariya Vishwa Vidyalaya, Mysuru Sub-Division, as part of its 15-day Golden Jubilee celebrations going on at Maharaja College Grounds here this morning.

Observing that women had due representation in Indian Culture since the era of the vedas, Dr. Sarvamangala said women began to gradually lose their identity in the later centuries and this tendency was brought to a halt with the advent of great vachanakaras such as Akka-Mahadevi in the 12th century.

Underlining the role of women in building the society, she noted that parents should educate their children on their role in taking the society forward.

Expressing disappointment at the way children are being brought up in the society, she called upon women to shun western culture and engage themselves in promoting Indian values and culture.