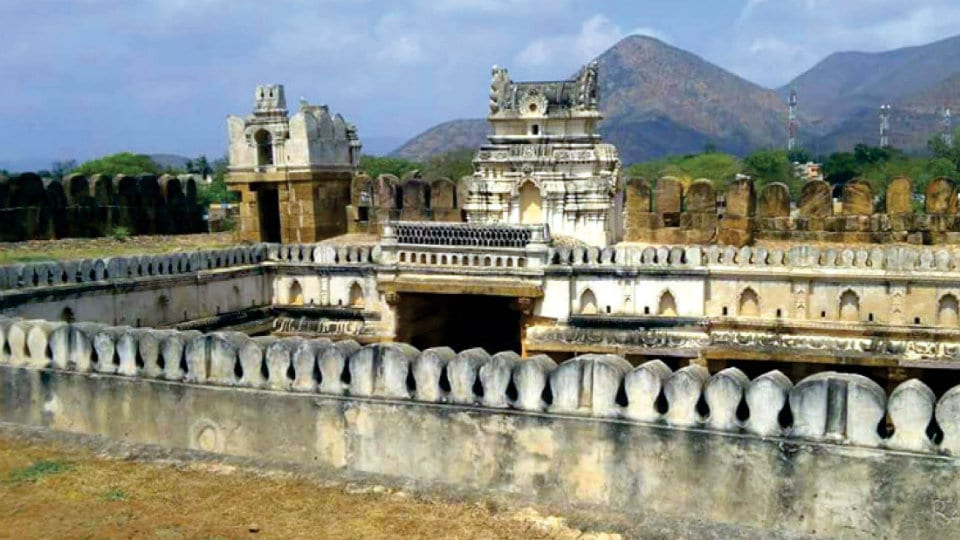 This word ‘Siddavatam’ should have been spelt as ‘Siddhavatam.’ The word ‘Siddha’ means one who had originated from the Gods. ‘Vata’ is a tree where Hindus go and perform rituals to dead relatives. Thus it conforms to our ancient tradition of giving a divine origin to our cities and forts.

Siddavatam Fort is located in Kadapa taluk of Andhra Pradesh. It was built in 1303 AD under the patronage of Tuluvas, who were the Nayakas (Chiefs) under the famous Vijayanagara dynasty, generally referred to as Golden Age of South Indian history.

Forts have played an important role in the defence of the ancient and medieval times. In fact, Mysore Palace also has a huge fort surrounding all the structures with many gates which normally have different names. Kautilya in his Arthashastra has given a list of seven limbs (saptanga) which include Svami (King), Amatya (Minister) and Durga (Fort) etc.

Even temples had tall forts to protect the images of Gods and Goddesses and the priests and others working in the temples including those who prepared the prasada. Thus forts acted as a hub of defensive and religious activities. There are many forts like Manjarabad fort, Gulbarga fort, Belagavi fort, Raichur fort, Chitradurga fort (which was picturised in Ramachari), Kittur fort which became famous by the heroic woman Channamma, Bidar fort, Basavakalyan fort etc. Nearer home we have Tipu’s fort. Some European forts are also famous. One of them is the fort house at Allington district, Kent of England. Thus there are many forts in India and other parts of the world.

It is important to find out the necessity of building forts. It is the practice to build forts on the hills or hillocks particularly facing the city from where one can get a glimpse into the movement of enemies. It also provides safety from the enemies because it is at a height and gives an aerial view of the enemies and their movement. Hence, forts had become a central spot for the kings to move about and to understand the movement of enemies. Our ancient texts including Kautilya’s Arthashastra give details of the construction of the forts, their location, height and the strategic points and other details. In fact, heir-apparent or the military Generals used to be taught all about the forts including the advantages and disadvantages if any. Thus firm foundations were laid to tackle problem of the forts.

Forts were built not only for the purpose of defence but also for the purpose of protecting trade centres, religious centres, etc. We have many examples in ancient Babylonia and other places; they protected themselves from the enemies and the robbers. Some of them go back to about 2500 BC. The Chinese built a fort to stop the Mongolian attacks in 221 BC and it was so complicated that it took about ten years to complete it.

Nearer home we have Indus Civilisation which has been dated to about 2500 BC. Scholars have opined that such a great civilisation was destroyed by the floods of the Indus river, perhaps this is due to the fact that these people could build forts by lumps of mud or bricks which could not withstand the floods. Had they known the use of stones they would have survived the attacks by the enemies. Now it has been thought the Vedic Aryans were responsible for the destruction of the Indus Civilisation. Of course many more reasons have also been given by the archaeologists to this. Indra is considered to be the king of Aryans and he has been considered responsible for the destruction of the Indus Civilisation and is referred to as Purandhara, one who destroyed the forts which were located in puras or nagaras. All these show the importance of forts in ancient times.

Under this background, Siddavatam fort may be examined. This is considered as Gateway to Shrishailam and also as Dakshina Kashi because it is as sacred as Kashi in Varanasi. Shrishailam is one of the sacred abodes of Lord Shiva. Incidentally, I had the good fortune of visiting Sri Mallikarjunaswamy Linga (Isvara) at least three times.

Siddavatam fort is built on the banks of the river Pennar and it was gifted by Vijayanagara king Arakeeti Venkatapatirayalu II in 1605 to Yellamaraju because the latter exhibited great heroism in the war. However, this fort was well developed by many additions to increase its strategic value. This was done by Sri Krishnadevaraya’s son-in-law.

Sometime later this fort came under the rule of Nawabs of Kadapa in seventeenth Century AD. But it was captured by Hyder Ali and later by kings of Mysore in about 1780AD. It also had a chequered career as it came under the Nizam of Hyderabad who captured it from Tipu Sultan. Finally it was conquered by the British in 1800 AD. It became a defensive fort and administration of Kadapa was done from here.

Later it became a protected monument and is being administered by the Central Archaeological Department from 1956. Thus it is being protected and repairs and maintenance are done properly and from that time it is being visited by hundreds of visitors.

When it was under the Muslims kings, they built mosques and other buildings in Indo-Sarcenic style. During the Vijayanagara rule a huge image of Nandi was built. But it is in ruins, perhaps destroyed by somebody.

As already said it is a mighty fort and occupies thirty acres of land and many gateways are still visible. Visitors are shown even today partly destroyed seventeen bastions. There are many temples built for Goddess Durga, Sri Ranganathaswamy, Siddesvara and Bala Bramha. There are many beautiful sculptures of Hindu Gods and Goddesses. Noteworthy among them is single stone sculpture of God Narasimha with his consort. God Narasimha is not Ugra but blessing the visitors along with Lakshmi. Thus this is a Lakshminarasimhaswamy sculpture. It is noteworthy that it is sculpted out of granite and the artists of this sculpture have to be appreciated. However, the local rulers waged wars to possess this strategic fort for themselves which included kings of Udayagiri and the rulers of Reddy kingdom.

This fort was visited by many great saints. Saint Chaitanya Mahaprabhu visited this fort and its temples and has recorded his appreciation. He has stated that after visiting Ahobila Narasimha, Saint Chaitanya saw many images including Sri Ramachandra and his consort Sita. Thus Chaitanya takes back the antiquity of this place on the basis of mythology to the times of Sri Ramachandra and Sitadevi. This only shows the importance and sacredness of this fort. This effort on the part of the visitors to take the origin of this temple to the age of Sri Rama makes the visitor supremely happy. This is our tradition. Historians may fix the age of any structure in terms of current system of dating but to a devotee it is timeless and ageless. Under this background all Gods and Goddesses have to be seen wherever they are. The sacredness of the Siddavatam fort is no exception to this tradition, and it has to be viewed from this angle.

PS: This article is based on a note by Sainath Reddy in a booklet (2018) for whom my thanks are due.