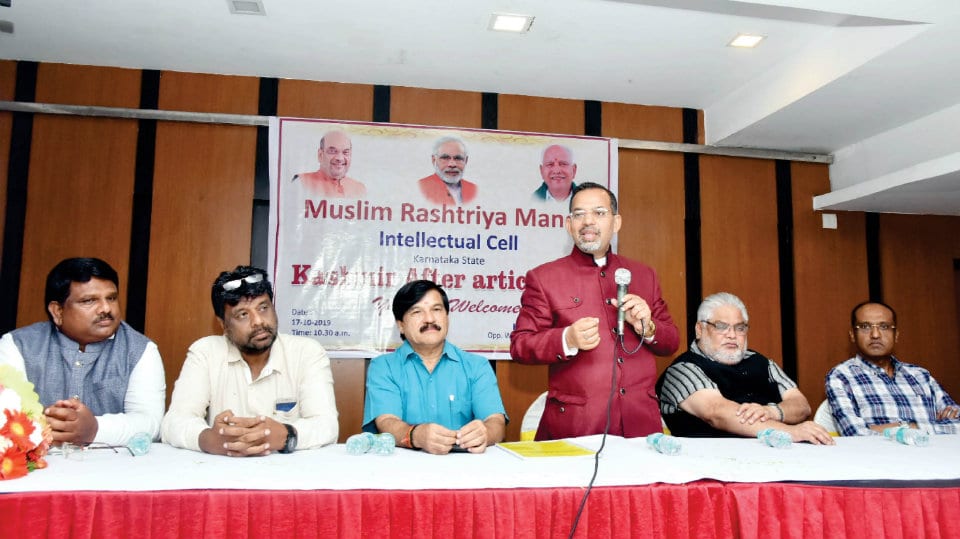 Mysuru: In an initiative aimed at sensitising the Muslim community members on the peaceful and harmonious situation in Kashmir post abrogation of Article 370, Muslim Rashtriya Manch (MRM), Intellectual Cell, Karnataka State, had organised a white paper presentation on ‘Kashmir after Article 370’ at Hotel President on B.N. Road here this morning.

The paper presented with a power point presentation reflected a better quality of life in Kashmir post abrogation of Article 370, coupled with peaceful and harmonious situation in the State, which was a centre of violence and hatred until recently.

Speaking to presspersons on the occasion, Supreme Court Advocate Shiraz Quraishi, who is also the National Co-Convenor of Muslim Rashtriya Manch, said that post abrogation of Article 370, Kashmir has become very much part of One India.

Maintaining that riots, arson, religious hatred and such other acts are now a thing of the past in Kashmir, Quraishi asserted that every Kashmiri is now feeling safe and secure in the State.

Pointing out that with the scrapping of Article 370 every citizen of the country gets the right to do trade and business and buy properties in Kashmir, he said that the Centre’s decision has been welcomed wholeheartedly by the Kashmiris.

Claiming that Muslim community members are largely happy with the decision, he condemned the false propaganda of some vested interests that Kashmir had become scary for Kashmiris.

Maintaining that with the abrogation of Article 370, ‘One India, One Law and One Constitution’ idea has come true, he said that the main objective of this event is to present the real picture of Kashmir post-Article 370.

Condemning vote-bank politics by disgruntled politicians, he opined that India is more stronger now than ever before and Hindu-Muslim bonding is getting better with each passing day in Kashmir.

He further  said the white paper will be presented to the President and Prime Minister after the end of this nationwide programme.

KR MLA S.A. Ramdas, who presided, said that the Centre’s decision to abrogate Article 370 has been welcomed not only in the country but also globally.

Claiming that a former VC, who is a Muslim, had told him that the scrapping of  Article 370 should have been done 70 years ago, he said that the Union Government’s decision is a bold one aimed at true integration of Kashmir with other parts of the country.

Highlighting the benefits of scrapping  Article 370, Ramdas noted the abrogation will facilitate people from any part of the country to do business, settle down or buy properties in Kashmir.

He said  the power point presentation will hugely help the people of the country realise that Kashmir had become a better place for living, with the prevalence of peace and harmony in the once trouble-hit Valley State.