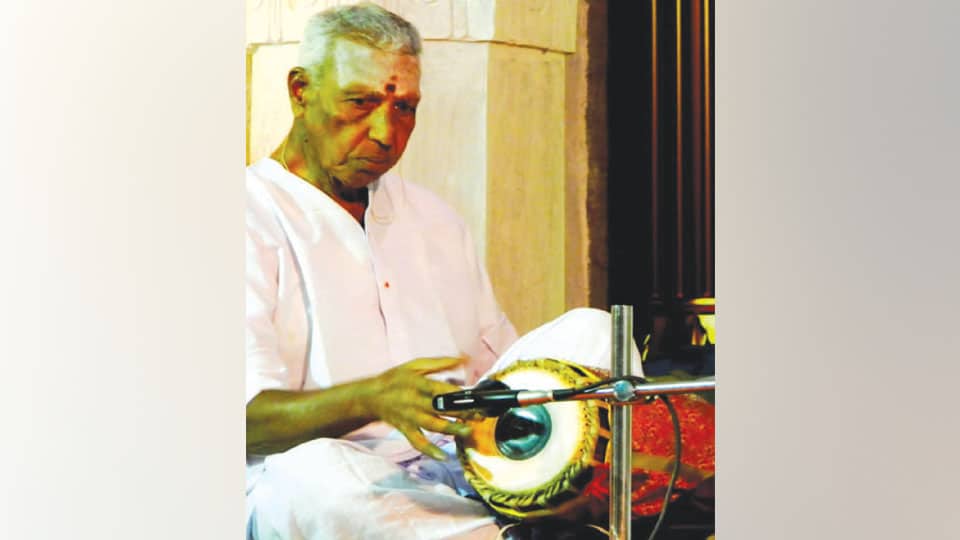 Mysuru/Mysore: Mysore Asthana Vidwan Prof. V. Nagabhushanachar, a resident of K.T. Street in city, passed away at his granddaughter’s residence in Dharwad yesterday. He was 88.

Son of K. Veerappachar and Chennajamma couple and a favourite disciple of ‘Nada Praveena’ M. Venkatesh, Prof. Nagabhushanachar was ‘Asthana Vidwan’ from 1956 to 1967.

From 1967 to 1992, he had served as a lecturer, Professor and Principal at Mysore University Fine Arts College. An expert in Tanjavur style Mridanga recital, he also played Konnakol, Kanjira and Morching instruments. He not only played classical music but was also well-versed in mridanga accompaniment to plays.

He had accompanied many stalwarts like T. Chowdiah, Mahalingam, Pallavi Chandrappa, D.K. Pattammal, Dandapani Desikar, Alathur Brothers and Doraiswamy Iyengar. In the dance field, he had given instrumental support to K. Venkatalakshmamma, Nandini Eswer and Umarao.

It is notable that he had given demonstration along with his Guru at Madras Music Academy in 1966. A recipient of Karnataka Kalashree and Mridanga Kala Sindhu, he was felicitated by Bengaluru Gayana Samaja, Karnataka Gana Kala Parishat and Chennai’s Shruti Laya institution.

His wife had predeceased him. His mortal remains were brought from Dharwad to Mysuru yesterday and last rites were performed at the foot of Chamundi Hill last evening.