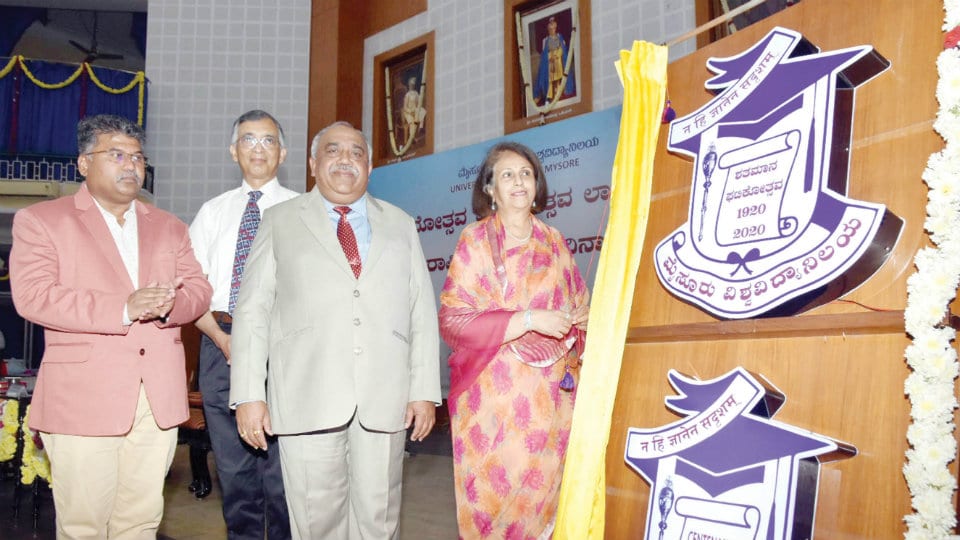 Speaking on the occasion, Pramoda Devi, who herself has designed the Logo, said that she was very much delighted to be an alumnus of the University.

Pointing out that the University was established by Nalwadi Krishnaraja Wadiyar, she said that she felt proud to be a part of the royal family.

Recalling that she had also designed the Logo for the UoM Centenary celebrations held in 2016, she thanked all those who helped her in Graphic Design.

Recalling the journey of the University over the century,  Prof. Hemantha Kumar said that the UoM has the distinction of conferring Honorary Doctorate degrees on great personalities like Jawaharlal Nehru, V.K. Krishna Menon and Dr. Rajendra Prasad and the University will continue to honour great achievers and personalities.

Highlighting the UoM’s plan for setting up an Engineering College of its own, the VC said that a blue-print has been prepared in this regard. Also, preparations for Centenary Museum has already begun, with co-operation from all the 56 Departments of the University and Post-Graduate Centres at Hassan, Mandya and Chamarajanagar.

Stating that the University has invited a tall leader for the Centenary Convocation, he hoped that the UoM’s wish will be fulfilled. (It may be mentioned here that Prof. Hemantha Kumar had met Prime Minister Narendra Modi  along with MPs Pratap Simha and Tejasvi Surya in July last and extended a formal invitation to him to attend the event. The PMO is yet to give consent).

Noting that Pramoda Devi had designed Centenary Logo too in 2015, he said the Convocation Logo released today is very artistic. The Logo is symbolic of the UoM’s pride, he added.

As part of National Science Day today, Prof. Uday Maitra of the Department of Organic Chemistry, Indian Institute of Science, Bengaluru, delivered a lecture on the topic ‘The Periodic Table and Us’. UoM Registrar Prof. R. Shivappa and others were present.