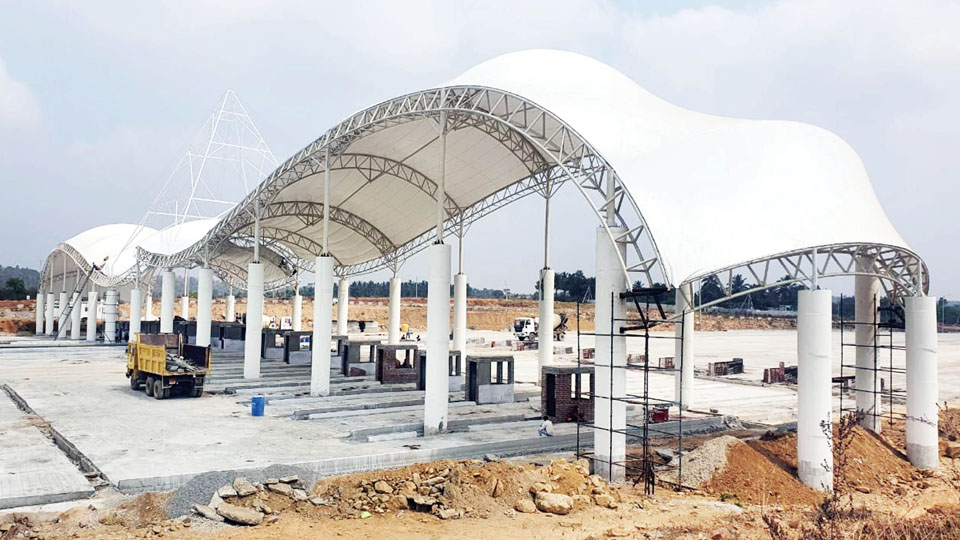 Elevated toll booths built after Srirangapatna and near Bidadi

Mysore/Mysuru: The introduction of tolls on new roads that facilitate travel is a nationwide arrangement. Likewise, works are in full swing to set up two toll plazas on the Mysuru-Bengaluru 10-lane National Highway (NH-275) that is being developed as an economic corridor.

The 117-km road, being built at a cost of Rs. 8,350 crore, will be fully operational by October this year and the same has been confirmed by Union Minister for Road Transport and Highways Nitin Gadkari, who has predicted the travel time between the two cities at 75 minutes.

Two toll booths are being built along the Highway on elevated stretches. Works are in full swing and the plazas will be operational with all high-tech toll systems and FASTag facility by the time the road works are completed.

While one toll booth is coming up near Ganaguru after Srirangapatna near K. Shettihalli, the second toll plaza is coming up at Kannaminaki near Bidadi. At Kannaminaki, there are two plazas for onward and return journeys and toll will be levied. In all, there are three toll plazas but toll will be collected only at two places, a top officer from National Highways Authority of India (NHAI) clarified.

When asked about the toll rates, the officer said that as of now, the toll has not been decided. “The road works have to be completed and only later the total project cost, number of passing vehicles, toll rates for all category vehicles will be decided. It is premature to discuss the toll now,” he said.

Meanwhile, the NHAI has enforced toll collection on Nanjangud Toll Plaza near Kadakola via National Highway-212 (now renamed as NH-766). The Mysuru-Nanjangud Road touches Ooty, Mysuru-T. Narasipur Road touches Kollegal and Tamil Nadu and Gundlupet-Moolehole Road touches Kerala. All these roads are part of NH-766 (earlier NH-212) that has now become          a toll road. The toll system has been enforced at the toll plazas at Kadakola (K.N. Hundi, Nanjangud), Yedadore on the T. Narasipur Road and Kannegala at Gundlupet.

14 COMMENTS ON THIS POST To “Mysuru-Bengaluru 10-lane Expressway: Toll collection to begin from October 2022”