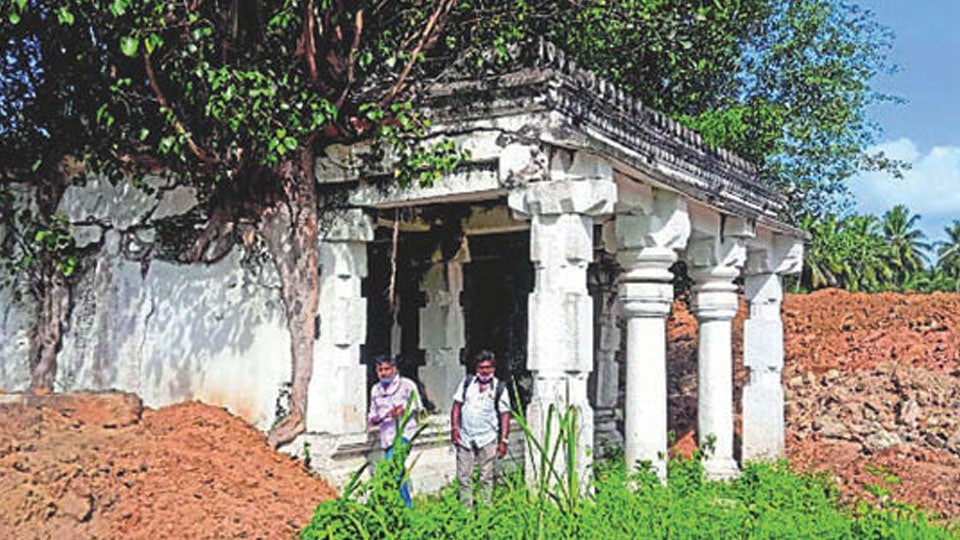 Mandya: The Gadde Ranganatha Temple near the historical town of Srirangapatna on Mysuru-Bengaluru Road is on the brink of losing its identity as it faces the threat of getting covered up due to the expansion works of Mysuru-Bengaluru Highway.

The National Highways Authority of India (NHAI) has taken up the conversion of Mysuru-Bengaluru Highway into a 10-lane Highway (including two Service Roads).

During the course of the works, NHAI has dumped the excavated earth around Gadde Ranganatha Temple located on the banks of River Cauvery near Srirangapatna. With the dumping of mud all around, the Temple seems almost fully covered on three sides and the iconic elephant sculptures in front of the Temple have already been entirely covered under dumped mud.

The local people have urged the NHAI authorities to stop dumping of excavated earth around the Temple and have warned that the Temple may get fully covered up under the mud if the dumping continues.

Gadde Ranganatha Temple was built by Vijayanagar rulers about five centuries ago with 12 large stone pillars. While the pillars in the front portion are round shaped, the rest are square shaped. Idol of the presiding deity Gadde Ranganatha Swamy is installed in the sanctum sanctorum at a height of about 3½ feet.

The locals have rued that despite its historical background, the Temple has not found place in the list of protected monuments. They want the Archaeological Department to come up with plans for the rejuvenation of the Temple.

Learning about the news, State Archaeological Department AEE Kuberappa visited the place and inspected the Temple. Speaking later, he said that a report with regard to the condition of the Temple will be submitted to the Department Commissioner. A case will be registered if the  monument is covered with mud or disfigured, he warned.