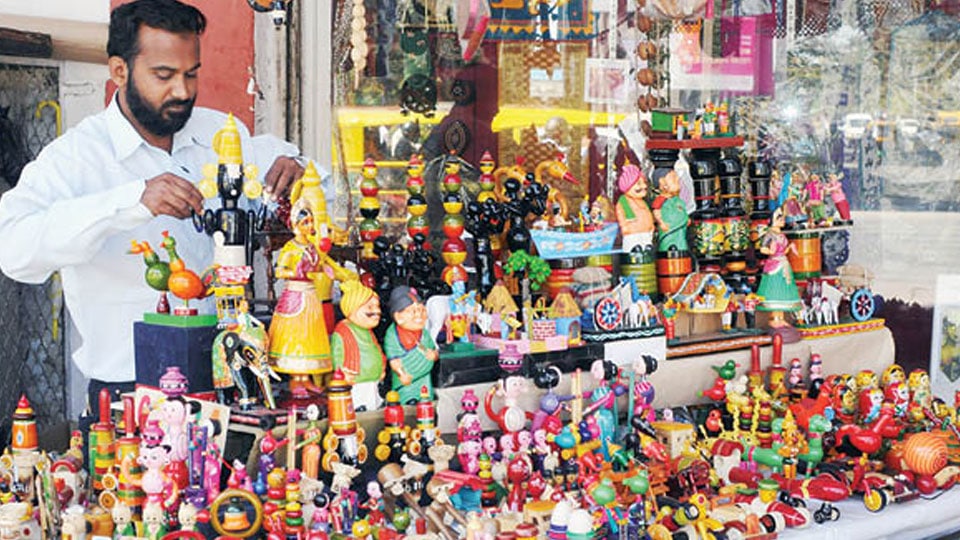 New Delhi: Prime Minister Narendra Modi, who gave thrust to local toys in his monthly ‘Mann Ki Baat’ on Sunday last, made a mention of the famous Channapatna toys also.

Channapatna is in Ramanagara District  of Karnataka and has the sobriquet ‘Toy City’ or ‘Gombegala Nagara.’

The outbreak of the deadly COVID-19 pandemic had dealt a crippling blow to Channapatna’s Toy Industry. Out of the nearly 200-plus toy making units, only 25 to 30 percent are functioning on a nominal basis owing to lack of demand for toys.

Despite the fact that the pandemic has  forced many toy workers to scout for sundry jobs for survival, some toy manufacturers say that diversification and innovation has helped many of them to fare well despite the challenges. Notwithstanding the challenges, including the threat from China, there is a belief that the sector can regain its glory and compete internationally, provided there is Government support like guaranteed higher wages, marketing and other initiatives.

PM Modi’s speech during his monthly Mann Ki Baat on Aug.30, 2020 is expected to give a push for policy initiatives, including setting up of a Toy Cluster, to shore up financial returns for toy makers and artisans.

Meanwhile, Chief Minister B.S. Yediyurappa, reacting to the Prime Minister’s vocal for local push for the toy sector, has tweeted that the State Government will carry forward the PM’s idea by setting up a Toy Cluster at Koppal in backward Kalyana Karnataka region of the State. The facility will have all the necessary infrastructure for making toys to domestic as well as international markets, he added.

However, hours after the PM’s speech on Sunday, Congress leader Rahul Gandhi pooh-poohed Modi saying that the students of the country were expecting the PM to discuss the more complex issue of JEE and NEET exams at a time when the Government has gone ahead with the conduct of the two Nationwide exams despite the  rapid spread of COVID-19 pandemic across the country.

Ridiculing the Prime Minister for taking up the ‘Toy Issue’ while ignoring the serious issue of the conduct of exams, Rahul Gandhi said that the PM discussed ‘Khilone Pe Charcha’, when the entire country was looking towards him for speaking his mind on ‘Pariksha Pe Charcha.’