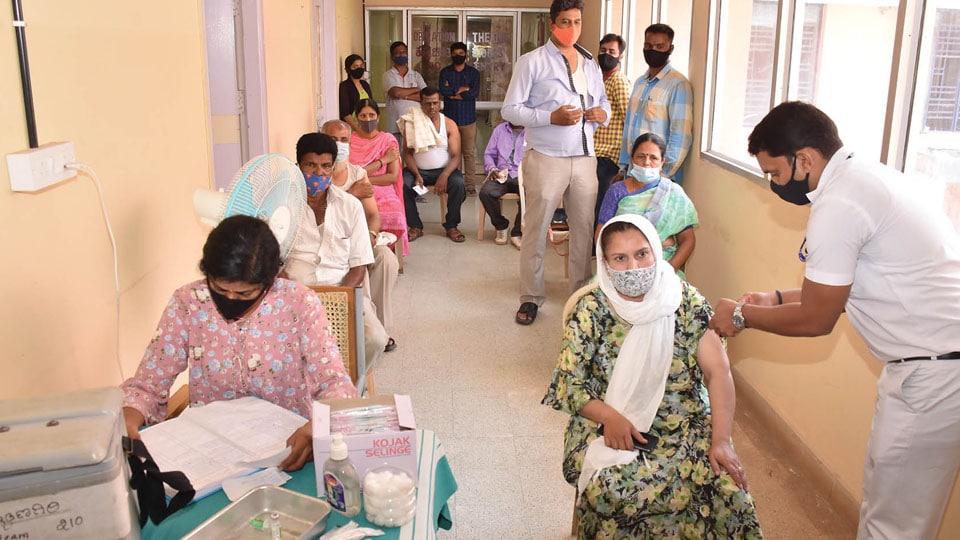 Mysore/Mysuru: The Mysuru District Administration has  speeded up the vaccine drive and has achieved the target by 126 percent on Apr. 9 and 10. The other districts have achieved targets between 18 percent and 85 percent. While Mysuru achieved 126 percent, Belgaum comes second with 85 percent and  Ballari with 84 percent.

Incidentally, Prime Minister Narendra Modi has called for A ‘Tika Utsav’ or Vaccine Festival from Apr. 11 (today) to Apr. 14. The festival is being organised in the country from today to inoculate maximum number of eligible people against Coronavirus amid a worrying surge in cases.

Mysuru District Tuberculosis Officer (DTO) Dr. Mohammed Shiraz Ahmed, who is also the In-Charge of COVID-19 testing, told SOM this morning that so far, 3,79,000 people of the District have received jabs. Mysuru has been given a target of vaccinating 25,050  eligible people every day and the district has exceeded this target by 126 percent on Friday (Apr.9) by vaccinating 31,459 people and 31,613 people on Saturday (Apr.10).

Not only this. Mysuru has topped the State in the vaccination drive as per the statistics for the first ten days of April. Dr. Shiraz said that a total of 51,009 people got jabs (both first and second doses) from Apr.1 to 10 in three classified categories — Mysuru Urban, Mysuru Rural and Mysuru Private Hospitals — including  27,390 people in Mysuru Urban, 14,348 people in Mysuru Rural and 9,271 in Mysuru’s Private Hospitals.

Stating that a massive COVID-19 vaccine drive across Narasimharaja Assembly Constituency of the city has been launched to reach the target, Dr. Shiraz said that mobile testing teams have been deployed near Masjids and awareness campaigns have been in place for the past few days. He further said that a pendal has been erected near Milad Park on Ashoka Road to ramp up vaccination.

Nationwide, India added 1,52,879 fresh infections on Saturday, setting another grim one-day record as the country’s COVID tally reached over 1.33 crore cases. 839 deaths in the last 24 hour pushed the total death count to 1.69 lakh. This is the fifth consecutive day that India has recorded more than 1 lakh cases in a day. The new cases reported are five per cent higher than the previous day when 1,45,384  cases were reported.

PM Modi’s appeal: The ‘Tika Utsav’ launched today marks the beginning of the second big war on COVID-19, PM Narendra Modi said as he made several suggestions to people on tackling the virus and urged them to focus on personal and social hygiene.

In his first request, Modi said ‘each one-vaccinate one’ means helping those (such as less educated and old) who cannot get themselves vaccinated. ‘Each one-treat one’ is about helping those who do not have the means to or do not know about the facilities available, for vaccination.

Under the third request, ‘Each one-save one’ Modi appealed for wearing masks that will help save the lives of the people. He said his fourth request as people must lead in the creation of micro-containment zones. Wherever a COVID-19 positive case has been reported, people of that family and locality must create a micro-containment zone.