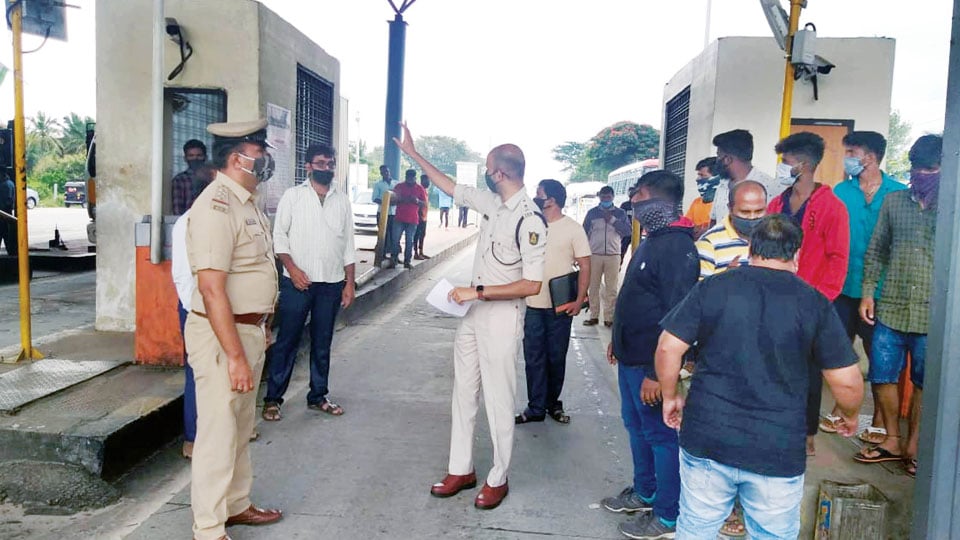 Mysore/Mysuru: Following the death of a toll collector after he was brutally assaulted by a group of youths on Sunday night at the Toll Plaza on Mysuru-Nanjangud Highway, Superintendent of Police (SP) C.B. Ryshyanth visited the spot and held discussions with the Toll Plaza staff and National Highways Authority of India (NHAI) Officials yesterday.

Pointing out that the private operators should impart training to their staff and also enhance security for the safety of their staff, the SP said that in case of any problem, the Toll Booth staff should not fight back with the motorists, but should remain calm as the security cameras record everything. The staff should then complain to the Police, who will take action based on the CCTV footages, the SP added.

Meanwhile, NHAI Project Director Sridhar, who too spoke to SOM said that the revenue (toll collection) was very less but the maintenance cost was more at the three Toll Plazas where 300 employees are working.

Pointing out that two-wheelers are exempted from the toll fee, he said that even sugarcane- laden trucks and three-wheelers transporting vegetables do not pay the toll fee and indulge in fights when asked to pay the toll. Hence, we have asked the toll the staff not to fight back and risk their lives, he said.

Citing loss and frequent fights at the Toll Plaza, Sridhar said that he would write to the State Government to take over the Toll Plazas.

Meanwhile, NHAI sources said that there is a request to provide free passes to the staff of Nanjangud Taluk Office but it cannot be provided as it is not under NHAI’s purview.