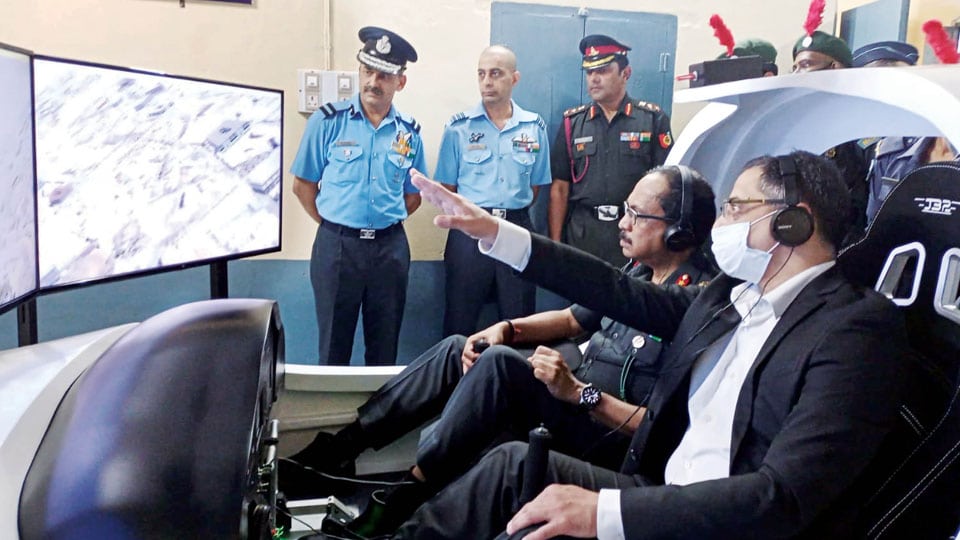 The DG was on a two-day visit and he was accompanied by Deputy Director General Karnataka & Goa Directorate NCC Air Commodore B.S. Kanwar, VSM. This is the first Virus Microlight Simulator which has been established in India by the Headquarters DG NCC. It is one-of-a-kind initiative by NCC DG Headquarters towards procurement and installation of 44 such simulators across all Air NCC units of the country. Air Wing NCC cadets of 4 Karnataka Air Squadron Mysuru will have the opportunity to be the first batch to be trained in specialised flying. It has been designed for Virus Microlight aircraft and will enable cadets to get near real-time hands-on training experience in flying the aircraft, said Group Commander Col. R.R. Menon.

Group Commander Col. R.R. Menon further said that the Simulator is capable of simulating day time, night time and bad weather scenarios to give the cadets an experience of flying under such conditions and assimilate better when they are exposed to real-time flying.

“The constant upgradation of training infrastructure will not only provide an opportunity to showcase their capabilities but will also provide multi-dimensional exposure to the cadets,” he said and added, “The Flight Simulator would enable cadets to fly solo also. It will go a long way in training Air cadets and this would also save fuel costs.”

The Virus SW is the most economical high-speed cruiser and the fastest high-wing aircraft family in its category. It is the only light aircraft that combines pure speed with unprecedented fuel economy. It can operate from elevations from sea-level up to 15,000 feet, take-off and land on short runways.

The medallions were handed over for their exemplary work done by them in various NCC activities including COVID relief work. The DG NCC was later briefed by Group Commander Col. Menon on all activities being carried out by NCC in Mysuru. The General Officer interacted with cadets, ANOs, CTOs and staff of NCC. The Director General left to Bengaluru by road this morning.