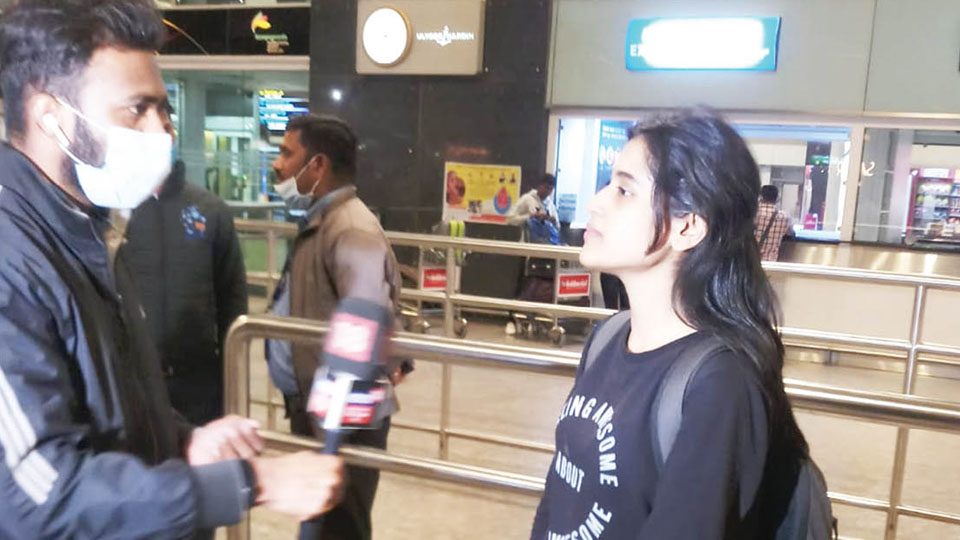 Mysore/Mysuru: A girl student from Mysuru district who was studying in Ukraine, has returned to India safely.

B. Gnanashri, daughter of Balasubramanya of K.R. Nagar, who had gone to Ukraine for studying medicine, arrived at Bengaluru’s Kempegowda International Airport Limited (KIAL) from New Delhi at 9.30 pm on Sunday. She was received by her anxious parents at KIAL.

Gnanashri had joined Bukovinian State Medical University (BSMU) in Ukraine for an MBBS course. Speaking to ‘Star of Mysore’, Gnanashri’s father Balasubramanya said that his daughter left Romania, which country she had crossed over to from Ukraine after Russia invasion of Ukraine, on Saturday and landed at New Delhi on Sunday morning.

After relaxing at Delhi’s Karnataka Bhavan for a few hours, Gnanashri left New Delhi in a flight and landed in Bengaluru at 9.30 pm. Along with Gnanashri, 13 other students from Karnataka too returned from Ukraine in the same flight, he said adding that he was thankful to the Indian Embassy, the Union and State Governments for safe return of his daughter.