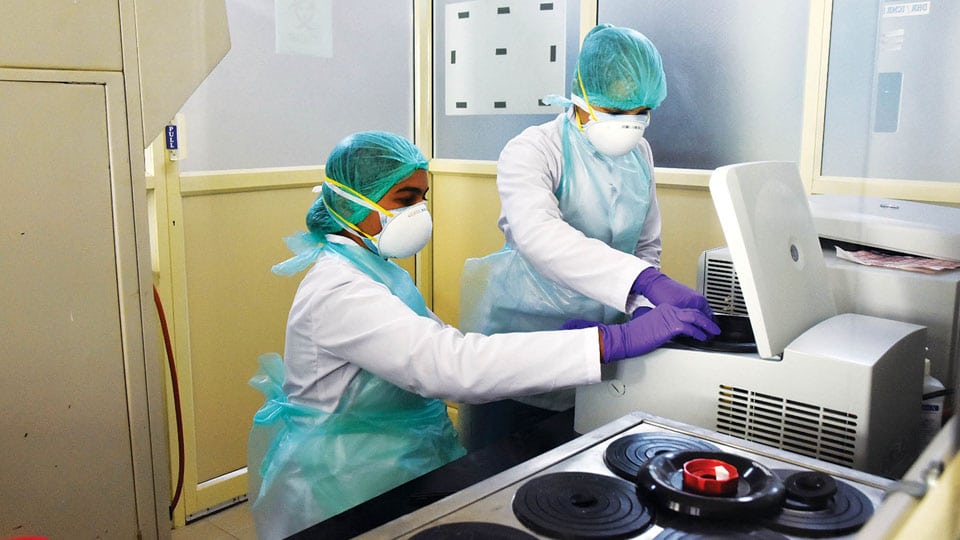 Epidemic under control as there are more number of negative cases, assures DC

Mysore/Mysuru: In a news that gives renewed hopes to Mysuru district that has been declared as a COVID-19 hotspot by both Centre and State, a report from the Department of Health and Family Welfare, Government of Karnataka, says that Mysuru district has topped the State in the number of tests conducted per million.

For the record, Mysuru recorded 88 COVID-19 positive cases (cumulative), the second highest in Karnataka after Bengaluru Urban that has recorded 101 positive cases. In Mysuru, as on Apr. 23, there are 55 active cases and 33 persons have been discharged. As per the media bulletin released by Mysuru District Administration, till yesterday (Apr. 23), 2,774 persons have been tested and 2,686 samples were declared negative.

Health officers who are in the knowledge of the testing process in Mysuru told ‘Star of Mysore’ this morning that Mysuru has fully implemented the guidelines issued by the Centre in fighting the epidemic. “In letter and spirit, we have implemented the COVID-19 positive cases check guidelines issued by the Centre and we have reached the target level of testing,” revealed an officer.

While testing, first the high-risk patients (with fever, breathlessness, respiratory illness and cold symptoms) are tested and second, their primary contacts are tested. Third, their secondary contacts are traced and tested and these are low-risk patients. “We conduct tests on general population based on the availability of testing kits. So far in Mysuru, we have tested over 3,000 samples,” the officer said.

In Mysuru, samples are tested at Viral Research and Diagnostic Laboratory (VRDL) located at Microbiology Wing of Mysore Medical College and Research Institute (K.R. Hospital) led by Dr. Amrutha. Samples from Mysuru, Mandya, Kodagu and Chamarajanagar are tested at VRDL, the officer added.

Addressing media persons in city yesterday, Mysuru Deputy Commissioner Abhiram G. Sankar said that the Coronavirus epidemic is under control in Mysuru now as there are more number of negative cases. These reassuring words that have come from the person (DC) who is at the forefront of COVID-19 battle in Mysuru are likely to provide further solace to the residents of Mysuru.

“There is no reason to panic. We have so far registered 88 positive cases and of that, 40 percent of the infected have recovered. 33 persons have been discharged. Two patients were in ICU and of them, one patient has been shifted to the general ward. Considering these factors, it can be said that the situation is under control,” he said.

The DC revealed that the testing process of all the employees from Nanjangud-based Jubilant Generics has been completed. However, their primary and secondary contacts need to be tested. Of that only two per cent may test positive or may not. “300 persons have ben quarantined at various hotels and lodges and over 300 persons have been kept under home quarantine,” the DC said.