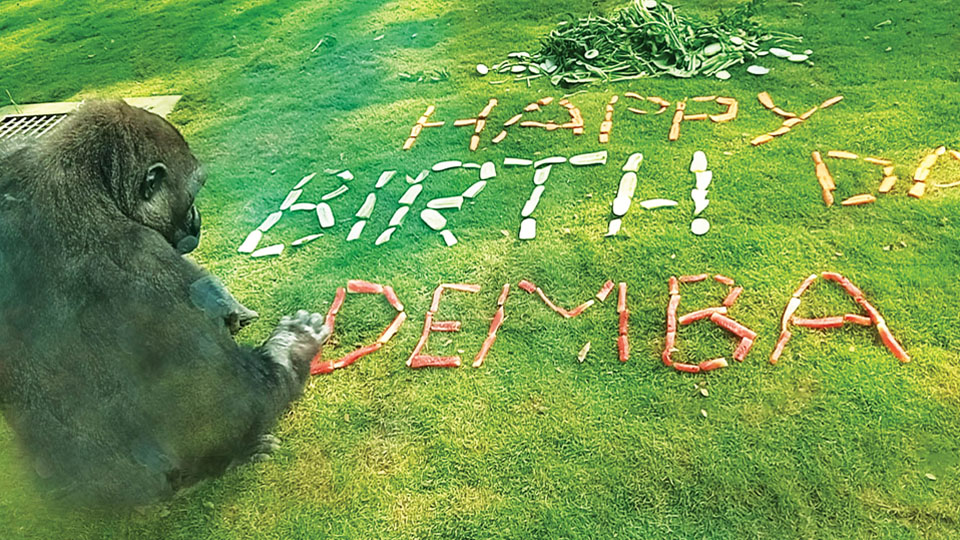 Mysore/Mysuru: We all get to celebrate our birthdays and our family and friends ensure that it is a special occasion. The same filial bonding was there for everyone to see when Demba, a gorilla at the Mysuru Zoo, celebrated his ninth birthday on Jan. 15. It was his first birthday celebration in Mysuru — in fact, India.

In keeping with the tradition, the Zoo management had arranged a fruity treat for the primate to make it special for the birthday boy where his favourite fruits and vegetables like carrot, watermelon, radish, beetroot and cucumber were arranged inside the open area in his enclosure to write ‘Happy Birthday Demba’.

In a video shared by the Zoo on social media platforms, Demba can be seen enjoying the fruits and vegetables while a happy set of visitors clicked photos on their mobile phones. The 2.5-minute video shows Demba coming out of his cage to an open area where the goodies were arranged.

The primate walked inside the open area looking around and observing the whole place. He was composed and calm on his way. Approaching the place where the actual decoration was, he picked up a cucumber piece and ate it first.

Later, it walked straight to the letters ‘Demba’ and started munching on the beetroot and watermelon from the letter ‘D’, picking up and gobbling the fruit pieces one by one as if to tell the onlookers that he is intelligent enough to recognise his name. Even the people who were witnessing this feat too were heard exclaiming that the primate is first eating the fruits arranged as per his name.

After polishing off most of the fruit pieces, he moved up to eat some leafy vegetables. The video has since gone viral on social media platforms. Incidentally, the Mysuru Zoo is the only Zoo in India to house gorillas — Demba and Thabo — that were brought from Germany through EAZA (European Association of Zoos and Aquaria) under EEP (European Endangered Species Programme).

While Demba is 9, Thabo is 14. They were brought to the Zoo seven years after India’s only gorilla Polo — 41-year-old Western Lowland gorilla — died in 2014 at the Zoo. Polo was brought to Mysuru Zoo in 1995 from Dublin Zoo and after its death, the gorilla enclosure was vacant until Demba and Thabo were brought.