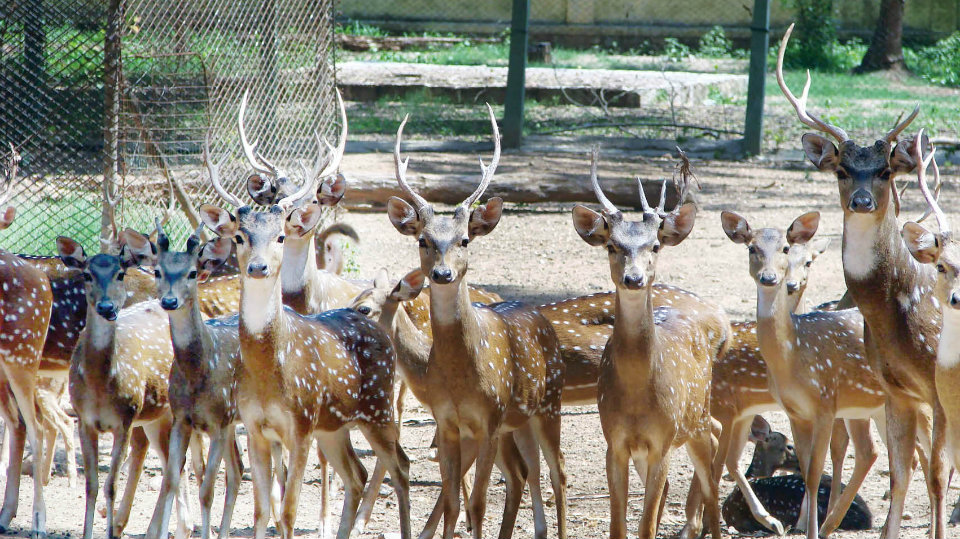 Mysuru:  In what could be another success story of Sri Chamarajendra Zoological Gardens, popular as Mysuru Zoo, 52 spotted deer were recently translocated to Arabithittu Wildlife Sanctuary situated in Hunsur taluk of Mysuru district. None of the animals were sedated and were translocated after days of natural conditioning.

The sanctuary is spread over an area of 14 square km with various species of animals, birds and plants. The sanctuary was created on 30th April, 1985. Arabithittu State Forest is situated inside the sanctuary. The sanctuary harbours leopards, spotted deer, wild boars, Indian porcupines, Indian hare, common mongoose, fox, partridges, cobra, rat snakes and viper, and the landscape has dry deciduous and scrub forests.

Notably, the Zoo authorities did not tranquillise the deer to shift them but conditioned them naturally so that they freely moved into a custom-built wooden container kept in their enclosure for a couple of days. The container was then lifted and mounted on a truck using a crane and shipped to the sanctuary for the release.

In all, there were more than 120 spotted deer in the Zoo and as per rules laid down by Central Zoo Authority (CZA), the Zoo can keep only 30 deer and excess population must be shifted to a conducive place. The Zoo witnessed excess deer population due to its successful captive breeding programme.

Speaking to Star of Mysore, Zoo Executive Director Ajit M. Kulkarni said that around 12 years back some of the spotted deer were shifted to Arabithittu Forests and at that time, the animals were bundled into trucks and shifted. “This time, we moved them by stage, in ‘soft shifting method’ without affecting them in any way,” he said.

Arabithittu Wildlife Sanctuary was identified for the translocation only after the area was studied where it was discovered that the forests supported herbivores like deer with plenty of fodder availability, he added.

Days before the shifting happened, the wooden cage like structure with feed and grass was placed inside the deer enclosure for the animals to acclimatise with it. Once the deer became familiar with the cage as they entered and exited it frequently, the same was lifted to trucks and the deer were translocated. Consent was secured from the Principal Chief Conservator of Forests (Wildlife) and the Zoo got approval to translocate 100 deer. The second batch will be transported soon, he added.

At Arabithittu, a separate chain-link enclosure of one-and-a-half-acres was created to move the translocated deer and all the deer have been housed there at present. “We feed the animals regularly and there are solar-powered borewells at Arabithittu. The feeding will continue till over 15 days so that the deer acclimatises to the surroundings. “The food is gradually reduced so that the deer would fend for themselves,” he said.

The deer being very sensitive, the possibility of them getting injured in tranquillisation process was high. Also, traditional shifting methods were rough and there were chances of animals being maimed permanently. “We adopted the conditioning method and within a span of 15 days, 52 deer were translocated. No deer sustained any injury and they are adjusting to the new surroundings,” he added.