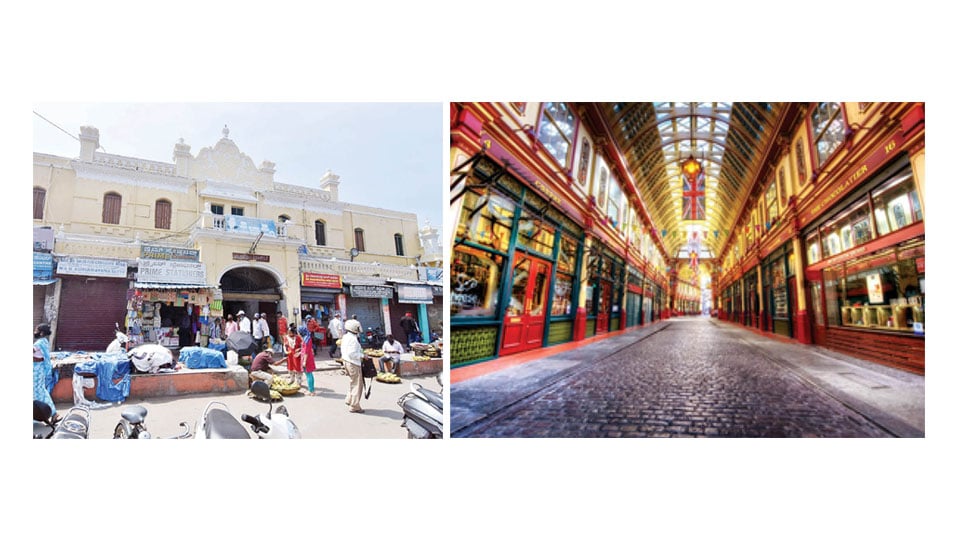 The images above are of the Leadenhall Market situated in the Central district of London. This structure was built in 14th century as a meat market and the original design was very similar to Devaraja Market of Mysuru.

This market is situated in the middle of the financial district with each square foot of real estate costing lakhs of rupees and London itself has overgrown the usage of this market.

However, instead of demolishing such an old structure the authorities of London decided to give it a dramatic redecoration which improved its appearance, enhancing its architectural character by adding ornate roofs and made it a listed heritage building. Today this market hosts butchers, barbers, restaurants & high end brands and also serves as a tourist location.

It is unfortunate that the authorities in Mysuru keep finding random reasons to eagerly demolish heritage structures that have barely crossed the 100-year mark. What’s more appalling is the fact that they find support from a few of the well-travelled citizens of Mysuru.

What Devaraja Market needs is a overhaul of infrastructure & management, restoring it on the lines of Leadenhall Market would not only enhance its beauty but also re-purpose it to be rented by top brands who can fund the maintenance of such buildings.

Countries like Italy & France have shown us how even 1000-year-old buildings can be restored, preserved and made functional for modern day. Mysuru will lose its basic character if it loses the heritage buildings that were part of its original plan.

Hope better sense prevails among the authorities and vested interests advocating demolition of such structures.

Note: The correspondent has an argument to win but not a solution to restore the old glory of Devaraja Market like it was done in London’s Leadenhall Market. What is sauce for the English goose cannot be the sauce for the Indian  gander. —KBG