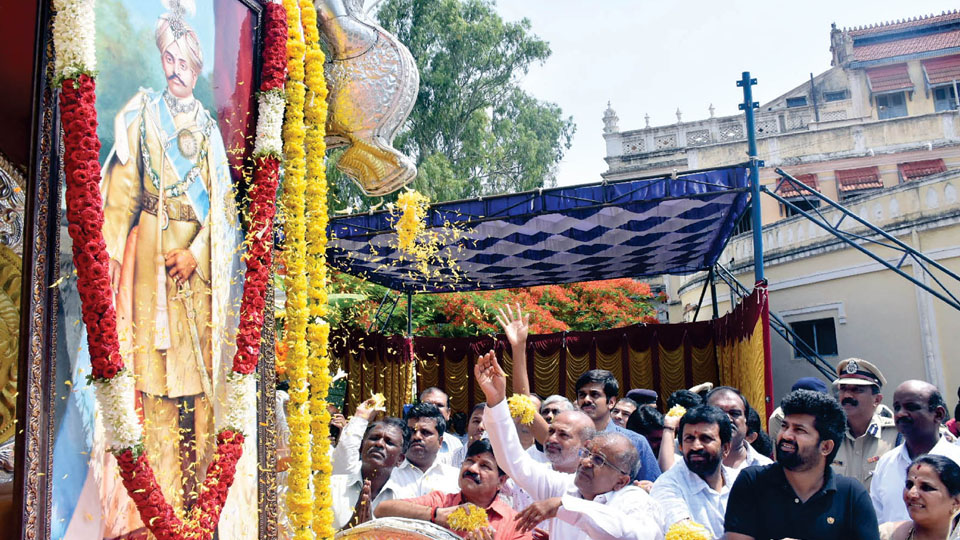 Mysuru: The 135th Birth Anniversary celebrations of Rajarshi Sri Nalwadi Krishnaraja Wadiyar, organised jointly by the District Administration, Kannada and Culture Department, Mysuru City Corporation and others began this morning, at the Lakshmi Venkatamanaswamy Temple, inside the Mysore Palace premises. District Minister G.T. Devegowda (GTD) offered floral tributes to the portrait of Nalwadi before the start of the procession.

Later, addressing the media, he said, Nalwadi as a ruler focused on social justice and gave importance to education, health, religious, cultural activities and art. He also brought in reforms by introducing reservations for the Backward Classes and Dalits.

Though Nalwadi was a dynastic ruler, he displayed the temperament of a democratically elected representative. Hence, it is imperative that we have to remember the great ruler for his ideals and the many development projects he introduced like building KRS dam, banks and other institutions so that future generations will try to follow his ideals, said GTD.

Tourism Minister S.R. Mahesh who also spoke to the media said that Nalwadi as a Rajarshi always gave importance to social justice. He was a model ruler whose family pledged their jewels to build the Krishnaraja Sagar Dam.

On the replication of Disneyland near KRS, he said that the action plan is already getting ready but it would be done in such a way that it would not damage KRS. Besides, experts’ opinion would also be taken before the project is implemented, he added.

The procession carrying the portrait of Nalwadi Wadiyar in a chariot, accompanied by folk troupes, passed through K.R. Circle, Devaraja Urs Road, JLB Road and Vinoba Road, before culminating at Kalamandira.

MLA S.A. Ramdas offered floral tributes to the portrait of Nalwadi at the Arasu Mandali premises on Tyagaraja Road, before the members took out a procession and reached Kalamandira.