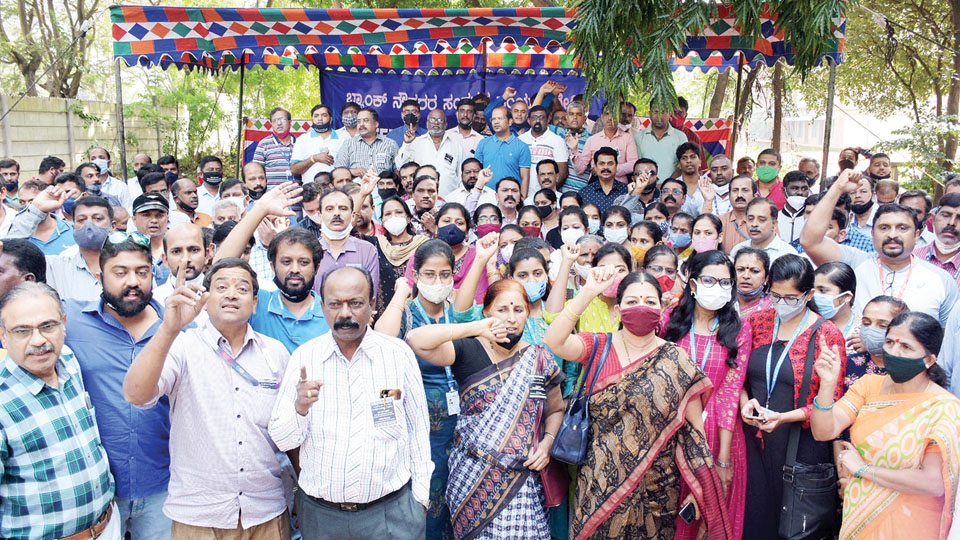 Mysore/Mysuru: Strongly opposing the Centre’s move to introduce the ‘The Banking Laws (Amendments) Bill-2021’ in the current winter session of the Parliament so as to enable the Government to privatise Public Sector Banks (PSBs), bank employees under the banner of United Forum of Bank Unions (UFBU) began a two-day strike this morning, which resulted in banking services coming to a halt in all PSBs across the city.

The United Forum of Bank Unions has called for a two-day nationwide strike (Dec.16 and 17) to oppose privatisation of Public Sector Banks.

In Mysuru city, over a thousand bank employees, officers and other staff staged demonstration in front of the SBI (State Bank of India) Divisional Office opposite Krishnadhama in T.K. Layout.

Maintaining that PSBs act as catalysts in the economic development of our nation in general and underprivileged sections and backward regions in particular, the protesting bank employees shouted slogans and argued that National Banks have played a major role in the development of agriculture, small trade, small businesses, transport  sectors and in upliftment of weaker sections of the society.

Claiming that the efficacy of private banks is under question as many of them have failed or closed down in the past due to mismanagement, the protesters contended  that on the other hand, all the PSBs are doing well and earning substantial profit.

Noting that the PSBs have a major share in the implementation of a multitude of Government schemes such as social sector loans, pension and insurance scheme etc.,  the protesting employees said that the Government must take note that it was PSBs which gave uninterrupted banking services when the COVID pandemic broke out last year.

Claiming that the huge accumulation of NPA (Non Performing Assets), which the PSBs are confronted with, is a result of wilful default of corporate and big business houses, they said it is a matter of reality that time and again PSBs have been used to bail out many ailing private sector banks.

Holding the view that privatisation of PSBs will jeopardise the interests of the common man and backward regions of the country, they said that they are strongly opposed to any privatisation move.

As the Bank Union sources said that the strike will continue tomorrow too, banking transactions will be severely affected on Dec.17. Over 1,500 bank employees, officers and other staff in the city will abstain from work tomorrow.