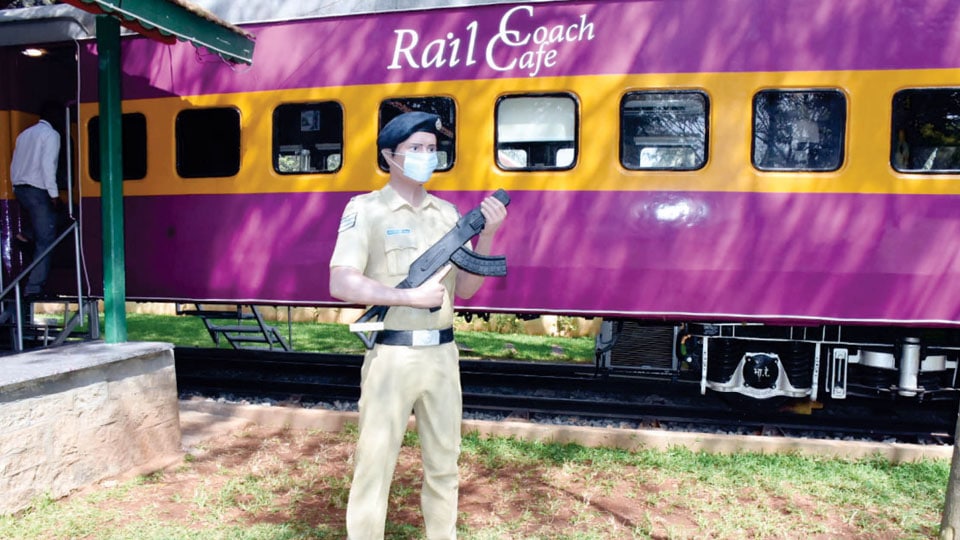 Mysore/Mysuru: The South Western Railway (SWR), Mysuru Division, which had installed a life-size sculpture of the celebrated cartoon character ‘Common Man’ created and immortalised by the illustrious cartoonist R.K. Laxman in the precincts of the renovated Rail Museum  recently, has added two more new attractions.

These new attractions in the Rail Museum will help visitors to get a sense of how these two distinctly different set of people have been significantly helping the Railways over the years.

It may be recalled, the Rail Museum, located opposite the CFTRI Main Gate on KRS Road, attracted a good number of tourists and visitors in October this year.

The Museum is open for public between 10 am and 5.30 pm every day except on Tuesdays. Entry ticket is priced at Rs. 50 for adults and Rs. 20 for children.

Kalika Agarwal, President, SWRWWO and other office-bearers of Women’s Welfare Organisation of Mysuru Division, were present on this occasion.

During the visit, the compute-rised Passenger Reservation System (PRS) installed in the Station for the benefit of rail-users was commissioned.

READ ALSO  Where everything is on track

A.K. Singh also inspected Mysuru Railway Station and the pitline to take stock of the situation following the gradual resumption of passenger services from Mysuru. Senior officials of Mysuru Division were present during the inspection.

The PRS at Chamarajapuram Railway Station will operate from 10 am to 12 noon and 3 pm to 6 pm on all days except Sundays (10 am to 12 noon), according to a press release from Priya Shetty,