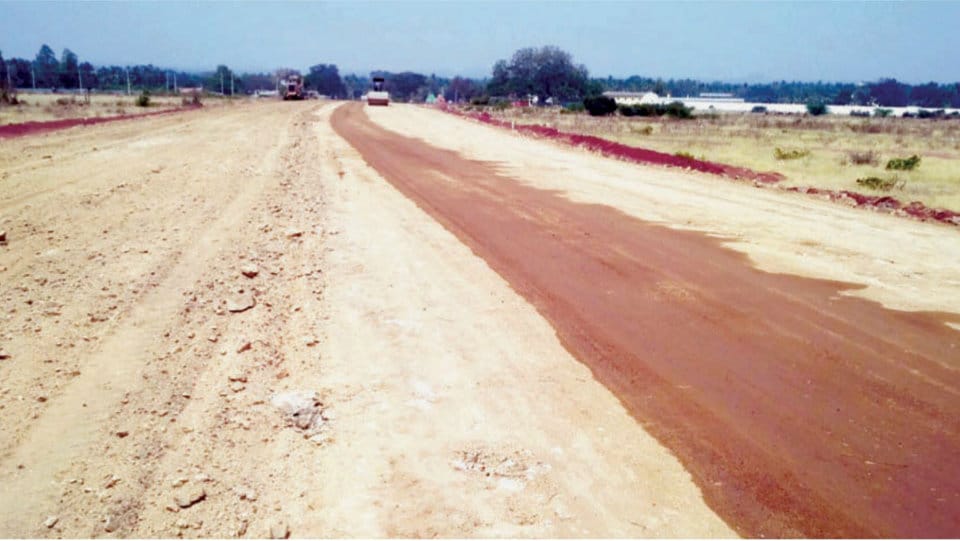 Chamarajanagar: The works on widening National Highway (NH) 209 and the by-pass road is going on in full swing. The NH-209 is the last of the major roads and the last National Highway from Bengaluru which is still a single lane.

The NH-209 connects Dindigul in Tamil Nadu from Bengaluru via Kanakapura-Malavalli-Kollegal and Chamarajanagar. It is also a second route for the Bengaluru-Mysuru Highway (till Malavalli) and for those going to Kozhikode in Kerala (till  Chamarajanagar).

The Union Government had sanctioned Rs. 2,400 crore for the development of NH-209 which included land acquisition costs. The widening works has been undertaken as the road from Bengaluru to Dindigul was badly damaged with the stretch passing through towns and villages being narrow, hampering the movement of vehicles.

The project envisages widening of the existing highway from two-lane to four-lane with a median for 33 km from Bengaluru to Kanakapura after which 137 km of the road will remain two-lane till the State’s border with Tamil Nadu, but will be widened by 10 mts.

The works pertaining to the Railway over-bridge has been constructed and construction of under-bridges at Uttamballi and Hampapura Road would be undertaken.

NH-209 will also connect Nanjangud Road from Somwarpet in Chamarajanagar and the works are in progress. The widening of the stretch from Doddarayapete Cross to Mallikarjuna Kalyana Mantap in Santhemarahalli is also going on in full pace.

With the bids floated earlier under Build Own Transfer (BOT) scheme failing to yield good response, the NHAI has invited bids under Hybrid Annuity Model, a variant of the Public Private Partnership (PPP) Model under which the concessionaire receives up to 40 per cent of the project cost from the authority as construction support.

Though the highway passes through Kanakapura, Malavalli, Kollegal and Chamarajanagar before entering Tamil Nadu, it is considered an alternative road between Bengaluru and Mysuru. Motorists can take a deviation at Malavalli, which is situated around 50 km from Mysuru and 108 km from Bengaluru.

Though the 108 km-long stretch of NH-209 from Malavalli to Bengaluru is bereft of much traffic, the 50-km stretch of road between Malavalli and Mysuru via Bannur is in a poor shape, discouraging motorists from considering the route as an alternative road to Bengaluru.

Meanwhile, Chamarajanagar MP R. Dhruvanarayan along with other senior officials who inspected the ongoing works, said that about 170 kms of NH-209 is being developed for which the Union Government had sanctioned Rs. 2,400 crore.

In this project, 67 kms stretch in the district is being developed which would also help in the development of the district. He further said that about 90% of land acquiring process has been completed and added that the works would be completed in two years.