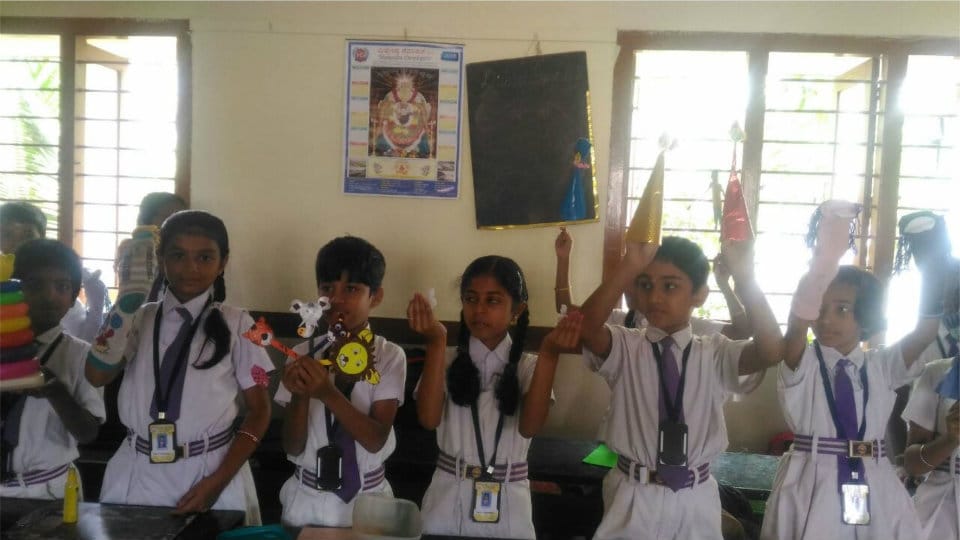 Mysuru: It was Mysuru’s own renowned novelist R.K. Narayan who had raised the issue of school children carrying heavy school bags in Rajya Sabha more than 30 years ago. Even after all these years, the problem has remained, as children continue to lug heavy bags on their back every day to school.

This issue was again raised in the Parliament a couple of months ago, when Congress MP Ambika Soni wanted to know what steps, if any, had been taken to address this issue. Human Resource Development Minister Prakash Javadekar had said that there were several suggestions being considered.

However, in our city, a school in Saraswathipuram, Vijaya Vittala Vidyashala has become a role model for all the schools. In a novel experiment, it has declared every second Saturday of the month as ‘No Bag Day.’

The children have to come to school on that day with just lunch boxes. They will not carry any books or other instruments to school. The back of the children will be devoid of any weight.

Does it mean that children on that day are really free and do not learn anything? On the contrary, they spent their time in very productive ways. ‘No Bag Day’ has been introduced from this academic year since July.

The Secretary of the Institutions R. Vasudev Bhat toyed with this idea and decided to introduce in his school. Initially, there was stiff resistance from a few parents as they felt that it would come in the way of daily studies. However, when Bhat explained the significance of such a step both the parents and teachers agreed.

“We have introduced ‘No Bag Day’ from this academic year. We also thought of introducing it every Saturday. But we realised that it will come in the way of completing syllabus and other problems and we finally decided that the second Saturday of every month is a good idea,” said Bhat speaking to SOM and added, “The aim is for overall personality development. Hence, we have made yoga and chess compulsory for all students.”

Asked whether anything was being done today, as it is Children’s Day, he said that today too, the children do not carry books to school.

What are the activities children involve in on every second Saturday? Head Mistress S.P. Asha said that there are various programmes like screening movies, singing, dancing, preparing sandwiches and other creative learning takes place. “The children are very happy and they eagerly look forward to second Saturday. As a result they are very alive and alert on other days,” she said.