Home » News » No golden run for KSTDC in Golden Chariot 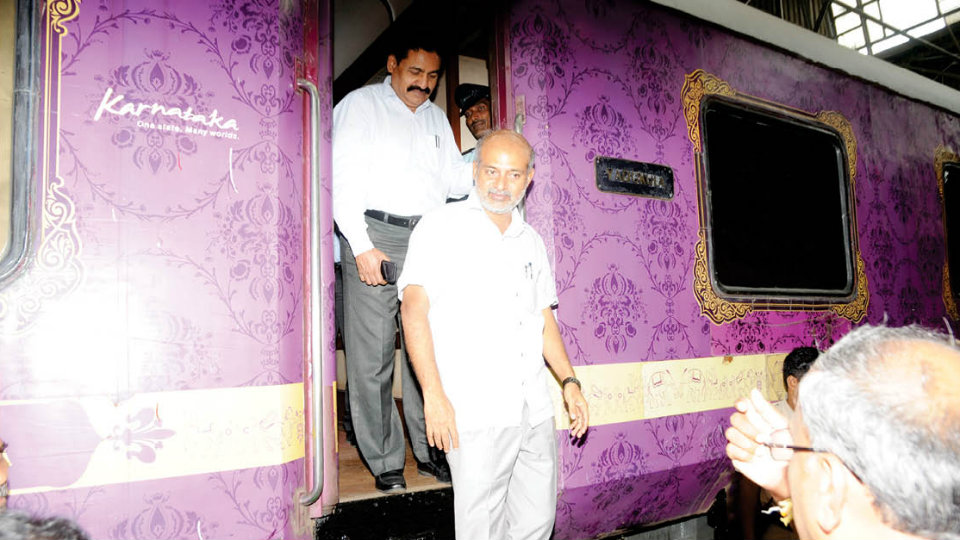 No golden run for KSTDC in Golden Chariot

Mysuru: The ‘Golden Chariot’ operated by Karnataka State Tourism Development Corporation (KSTDC) has been unable to reap golden benefits for KSTDC. Ever since it was launched in March 2008, it has incurred losses of over Rs. 40 crore.

The Golden Chariot’s 18 coaches are fitted with modern facilities and the train has seen a gradual dip in revenue collection. With foreign tourists comprising the bulk of travellers, the luxury train only boasts of 30 percent to 40 per cent occupancy per trip.

The issue was raised yesterday when Tourism Minister S.R. Mahesh visited the Ashokapuram Railway Workshop in city. The government is coming up with an attractive train design with more facilities and thinking of devising attractive packages to attract tourists. “The design work is being undertaken at Ashokapuram Workshop.

“On an average, it is Rs. 4 crore losses every year. The service of Golden Chariot is suspended since the train is getting a makeover with new interiors. We are working on plans to make the train attractive for tourists, and generating more revenue with the same tariff will be our priority once the train gets the makeover and its operations resume,” the Minister said.

“The occupancy is less though the train passes through many heritage places, from Hampi to Mysuru. The high haulage charges imposed by the Railways are more than the train’s net revenue,” the Minister said and added that the KSTDC is paying between Rs. 50 lakh and Rs. 55 lakh per trip as haulage charges to the Railways.

Kumar Pushkar, Managing Director of KSTDC, said that there were some technical problems including air-conditioning, fitting of bio toilets and replacing glass sheet with clear glass. The train is undergoing overhauling and the design will be changed. We’ll be re-branding the Golden Chariot, he said.  “Normally, the Golden Chariot service starts during Dasara. But this time, it is doubtful as the overhauling works have to be completed,” he said.