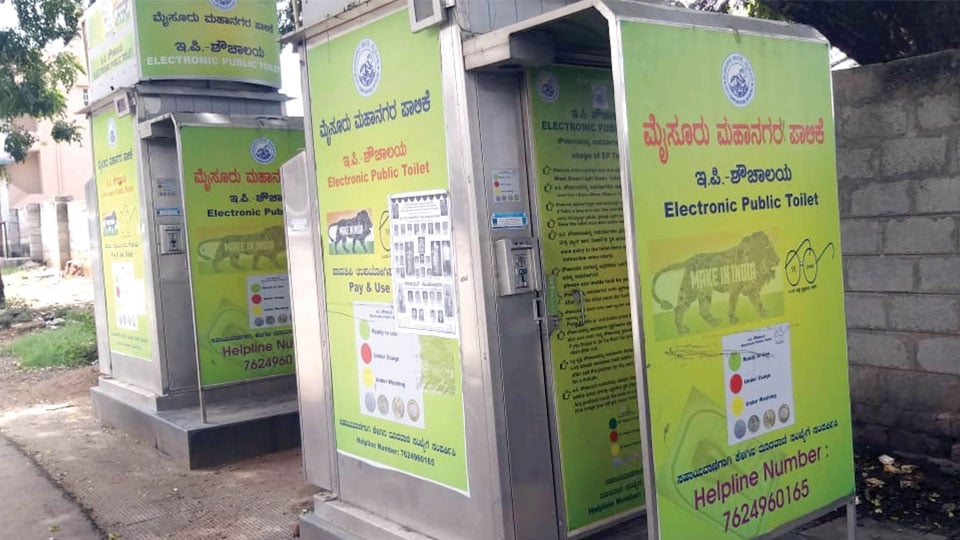 Making Mysuru open-defecation-free has been a promise of sanitation drives for at least 15 years. But latest statistics suggest that taxpayers’ money spent through the Mysuru City Corporation (MCC) to tackle this problem has by and large been flushed down the sewer.

A majority of pay-and-use e-toilets in city are dysfunctional. Several users have been complaining about technical glitches. In spite of inserting coins, the toilet doors do not open. A total of 24 e-toilets have been installed in city and most of them are non-functional and some are a stinking lot as people are forced to relieve themselves bang behind the e-toilets.

“I inserted a coin to use the toilet, after a while it asked me to insert coin again, then I inserted one more coin, it asked me same to ‘insert coin’ for the third time, then I understood there is some technical issue with the machine. It is so disappointing,” said a girl student of Maharani’s College who had no place to go to answer the call of nature in the urban jungle.

“I was really happy when three e-toilets were open on D. Devaraja Urs Road and near the shop where I work. But the happiness lasted only for some time as the facility became non-functional,” said D.N. Pallavi who works for a shop on Urs Road.

The MCC has spent over Rs.1.50 crore two years back on establishing these e-toilets with a garb of Green all over the structure. Of course, the intention was good but the way the project has been implemented it is sure to raise a stink.

In all, 24 e-toilets were launched with much fanfare and during the launch, the MCC authorities had claimed that e-toilets will revolutionise sanitation in Mysuru. But a reality check by Star of Mysore tells a different story. All the toilets are 3ft x 6ft in diameter and operates when a user inserts a coin.

Each toilet has been built at a cost of Rs.6 to Rs.7 lakh and more than 18 out of the 24 e-toilets were defunct. Either the red lights were not working or the coin slot of the machine was broken. At some toilets, the doors do not open even if one puts a coin in the slot. The machine demands more and more coins.

As the lights are not working, people assume that a particular toilet is free for use. In case a user inserts a coin, he will not get it back as it remains in the machine itself. A few of the e-toilets do not have water supply as the connections have been cut.

Forced to relieve or hold back

As many of such facilities are not working, men are forced to relieve themselves behind the e-toilets while women are forced to hold back or search for another place. Both the toilets on Kantharaj Urs Road and K.G. Koppal Circle are non-functional since the very first day while the e-toilet set up near the Bisilu Maramma Temple (pic. alongside) has not been operational since the last six months, say residents of the area.

READ ALSO  Will the good-old Gandhinagar vegetable market be restored?

The door of the e-toilet in the campus of Cheluvamba Hospital has been broken and has not been repaired though hundreds of patients visit here every day and are in desperate need of a clean place to answer the nature’s call.

The facility near the Youth Hostel in Gangothri Layout was working fine for some time. But soon, the entire e-toilet box was found missing. “It just vanished one morning,” said Pradeep, a student of University of Mysore, as he shows the base of the e-toilet along with a water pipe and wires at the spot where the facility once existed.

Nobody has used the e-toilet set up near Central Institute of Indian Languages (CIIL) on Hunsur Road probably because there is a fear that a user might get stuck inside if the door does not open. There are three such facilities on the D. Devaraja Urs Road and there is a “Not Working” board on one e-toilet.  In another e-toilet on the same road, the green light indicates that the toilet is ready for use. But if one inserts a coin, neither the door opens nor the user gets back the inserted coin.

“This is sheer waste of money for a Corporation that is always cash-strapped. The toilets were constructed by Eram Scientific, a Kerala-based company and it maintained them for one year guarantee period. Later, the e-toilets were handed over to the MCC that failed to maintain even one facility,” said Jayaram, a businessman on D. Devaraja Urs Road.

“The maintenance of e-toilets was handed over by the MCC Health Department to Vani Vilas Water Works (VVWW). Though tenders were called to maintain e-toilets, no one came forward. A re-tender for the project has been called and all the 24 e-toilets will be maintained soon,” said Executive Engineer (UGD Division) Mahesh.