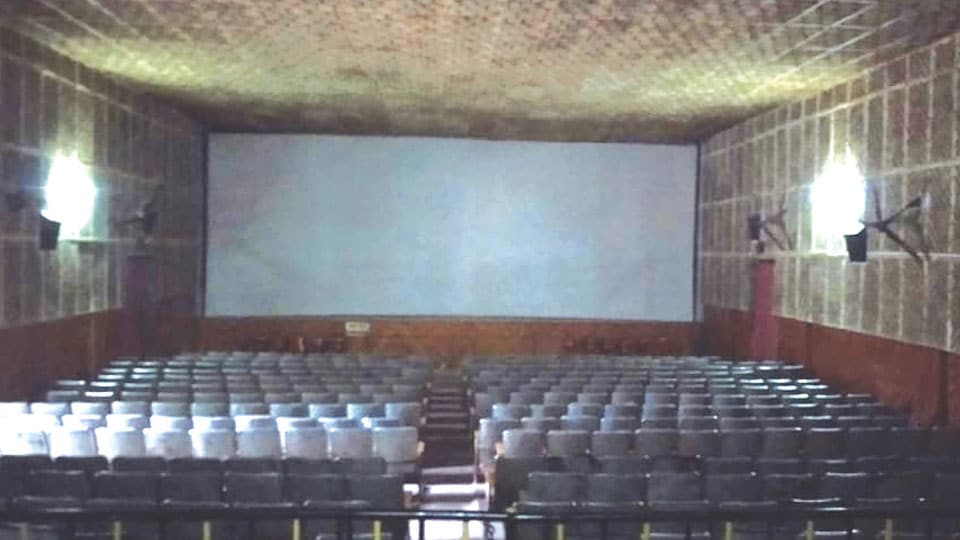 No shows in theatres till Producers make movies

Mysore/Mysuru: With movie Producers unwilling to release films in theatres due to seating restrictions amid the pandemic, Karnataka Film Exhibitors’ Federation has asked Producers to submit a list of films that are ready so that theatres can be opened to screen those movies.

Speaking to reporters after a meeting of Karnataka Film Exhibitors’ Federation at Saraswathi Theatre in Saraswathipuram on Sunday, its Chairman R.R. Odugoudar said that the Government had given its nod to reopen theatres with restrictions and by following Standard Operating Procedures (SOPs) as per the Unlock 5.0 guidelines with 50 percent attendance. “We are ready to open theatres, but at least we must have a list of films that are ready,” he said.

“It is not possible to open theatres with just one or two films in hand and we have had a meeting of Film Producers where it was conveyed to us that only ‘Pogaru’ Kannada cinema was ready for screening. How can we open the theatres for only one cinema? There is no meaning in opening all the theatres just for one movie,” he said and added that at least five to six cinemas must be ready for a part of theatres to open.

“Till then we will be forced to close our theatres. Both exhibitors and producers are in distress. Besides, we have been demanding the Government levy electricity charges at industrial rate instead of commercial rate and permit us to collect percentage-based service charge on net rate of tickets for both non-AC theatres and AC ones like the system is being practiced in multiplexes. Producers have to agree for percentage system. But our demands have not been met,” he said.

Producers must agree to change the existing business module of fixed weekly payments to a percentage-based module, he said.

“Tamil Nadu and Andhra Pradesh Governments have announced special packages for theatre owners where loan facility of Rs. 10 lakh is being provided. The loan is interest-free for first year and from second year, the loans can be repaid in easy instalments. The Karnataka Government too must announce such relief packages and we appeal to the Chief Minister to announce such a package that will benefit both city and rural theatres,” he said.

Preference will be given to Kannada language when compared to other languages. “Let Kannada movies release first and other languages can come later. In Tamil and Telugu, three movies are ready to be released,” he added.

Federation Vice-President M.R. Rajaram said, there were more than 450 members in the Federation and all the 12 theatres in Mysuru too are members. “All members of the Federation have met twice and it is not possible to screen just one movie in all the 12 theatres in Mysuru as it will increase the burden on theatre owners. If only 50 percent of the audience is allowed, the income is only sufficient for rentals, salaries and taxes. What about the other expenditure,” he questioned.

Rajaram said that it was a wrong notion that if the ticket prices are increased there will be more income. “Ticket pricing will remain the same. It is better to have some activity instead of theatres being idle. If not profits, we must see to it that there are no losses. Let Producers release cinemas and we are ready to screen them,” he added.