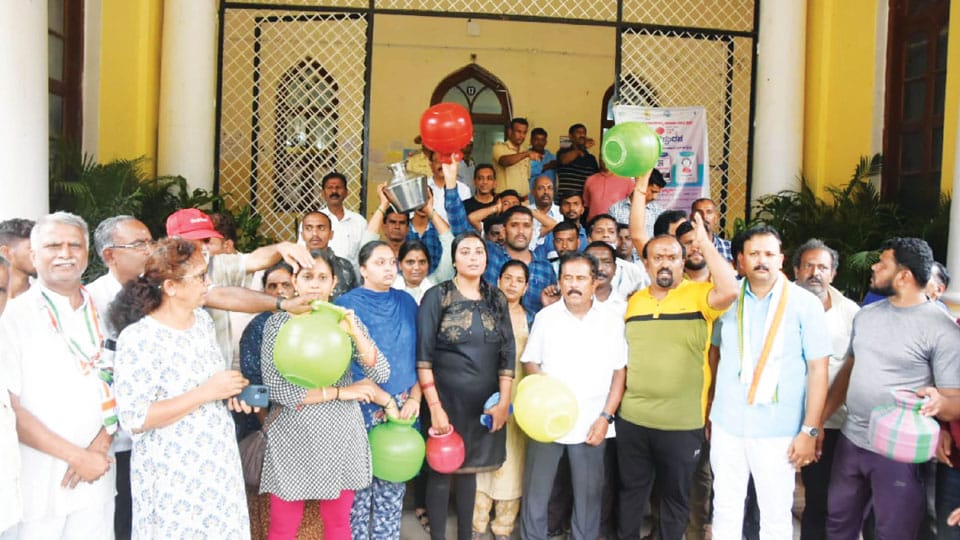 Mysore/Mysuru: The residents of Srirampura, Vivekanandanagar and surrounding areas coming under Ward No. 59 and 64, staged an empty pot protest in front of Mysuru City Corporation (MCC) office this morning.

Prior to this, the angry residents, led by former MLA M.K. Somashekar, had blocked roads near Vivekananda Circle in city this morning. As neither the area Corporators nor the authorities concerned showed up, the protestors staged a demo in front of the MCC office.

The residents alleged that from the last five days there was no water supply and they were finding it difficult to carry out daily activities. Children are sent to school without a shower. There is shortage of drinking water too and cooking has become a major problem, the residents alleged.

Somashekar alleged that K.R. Constituency is facing an acute shortage of water while the Constituency MLA, the Mayor and the  respective Corporators have turned a blind eye to the problems faced by the residents.

The MLA, who had assured of making the Constituency as a model one, has completely failed in discharging his duties, Somashekar said and blamed the MLA for neglecting the residents.

The protestors shouted slogans against the officials concerned and urged them to solve the water problem at the earliest.

MCC Commissioner G. Lakshmikantha Reddy, who visited the spot and heard the grievances of the residents, assured them of supplying water by evening. Following this, the residents withdraw their protest.

Meanwhile, a resident of KHB Colony in Kuvempunagar, called SOM office this morning and  complained that there was no supply of water since Saturday. Though drinking water was supplied for a short period, that too during night on Sunday, there is no supply of water after that, she added.

READ ALSO  Is Mysuru City geared up for No.1 tag?