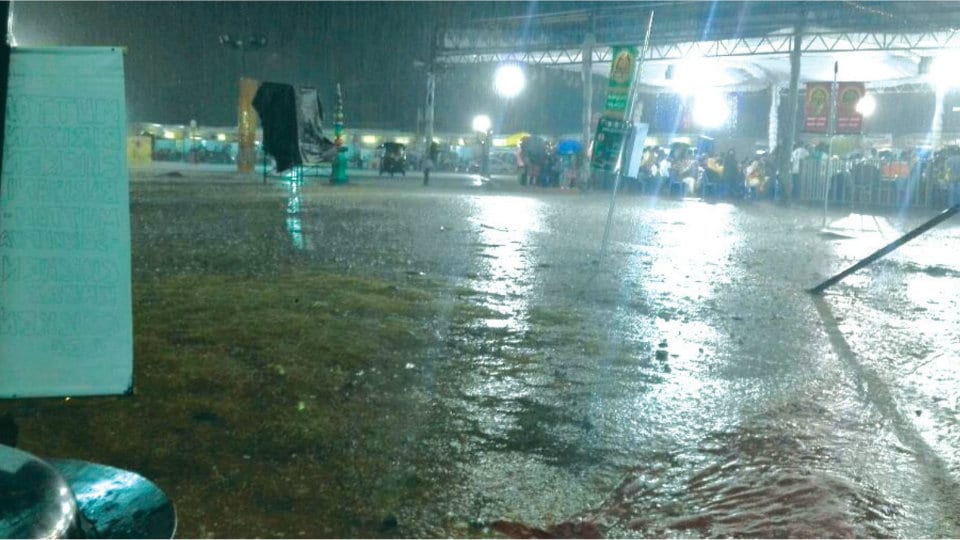 Not many takers for Dasara Aahara Mela at MUDA Grounds

Mysuru: If the Dasara Aahara Mela organised at the Scouts and Grounds behind the Deputy Commissioner’s Office is attracting people from far and wide, the second venue of the Mela at MUDA Grounds near Lalitha Mahal Palace Hotel is virtually deserted.

Vendors who have set up shops there have complained that they are not getting people, forget doing business.

“Ever since the Aahara Mela began from Sept. 21, there has been lukewarm response here and every day we prepare food in anticipation of the crowd but hardly anyone comes,” said a vendor. “We are in no position to think about profits as we are losing what we have invested,” he added.

In anticipation of the crowd on Sunday (Sept. 24), a vendor said that he had prepared 25 kg of Dum Biriyani. “As it rained heavily on that day, none turned up and over 12 kg of Biriyani had to be thrown,” the vendor said.

“We sell special Dharwad Peda, Karadantu and Belagaavi Kunda and we have purchased this outlet with much expectation. Sadly, lack of publicity and the distance factor have contributed to business loss. So far, we have seen sales from 10 percent up to 15 percent only,” said Rajesh, a vendor from Hubballi.

Divya Chikkamani, another vendor from Hubballi who has set up ‘Shivayogi Chikkmata Girmit, Jowar Roti, Yennegai outlet’ at the Mela said that she had asked for an outlet at the Scouts and Guides Grounds but was denied one there. “While the other stalls at Scouts and Guides are doing roaring business, here it is less than 50 percent,” she lamented.

While Bannur Mutton and Chicken Stall owned by Prashanth of Bannur saw some sales, he felt that the Food and Civil Supplies Department’s move to collect Rs. 15,000 from the vendors was unfair and too high. This apart, the Melukote Puliyogare outlet had to face severe losses and have been throwing whatever stocks they have prepared.

Lokesh Patil from Vijayapura, who had set up Jowar Roti Yennegai stall at Scouts and Guides Grounds last year is disappointed this time as he was allocated a stall at the MUDA Grounds, far from the Central Business District. “What we sold in just a day last year can’t be sold even after three days this year. Whatever profits we gain at the Aahara Mela we distribute among blind children. Unfortunately, there is no business this time,” he said.

So much so that even the most popular Bamboo Biriyani stall has suffered a loss here. “People are unable to recognise Bamboo Biriyani stalls here unlike the Scouts and Guides Grounds. Several vehicles are parked in front of our outlets and has blocked our stalls and people cannot see us,” said a vendor who sells Bamboo Biriyani. “To make matters worse, rain is playing spoilsport and the venue is turning into a slush pool,” he added.

Several vendors have urged the Deputy Commissioner not to conclude the Aahara Mela on Sept. 30 but allow them to continue for two more days.  According to vendors, the Scouts and Guides Grounds Mela will come to an end on Sept. 30. “As there is an extended holiday on Oct. 1 (Sunday) and Oct. 2 (Gandhi Jayanthi), we must be allowed to conduct business on those days. This way, we can at least attempt to make up for the loss,” a vendor said.