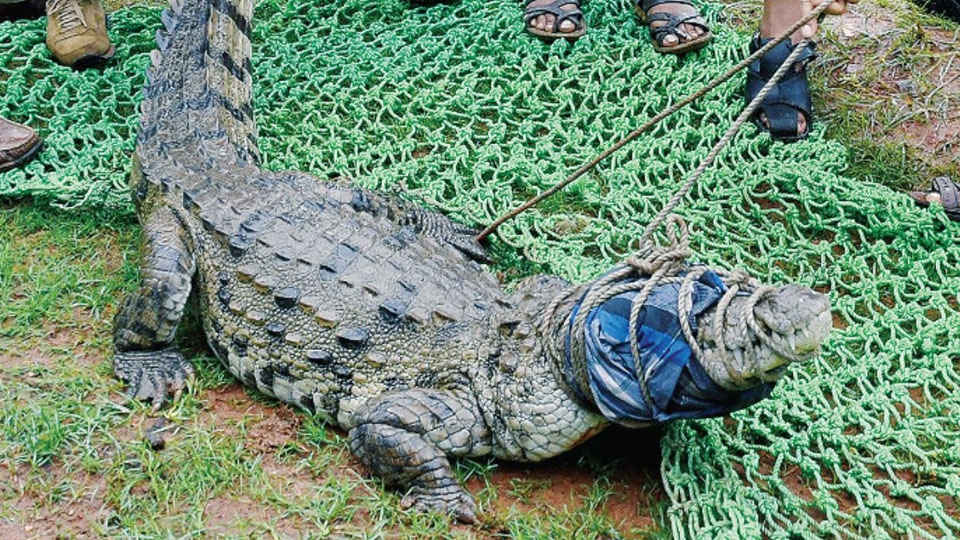 Mysuru: Even as a leopard cub straying into the Mysuru Zoo is still fresh in memory, comes the news of a crocodile finding its way on to the middle of a road, here in the wee hours of Saturday.

The incident came to light, when the Police night patrol Garuda team was on their night rounds on Thandi Sadak Road adjoining Karanji Lake around 2 am.

The team spotted a hump and wondered how an incomplete road hump could appear. Once the car’s headlights shone on the object, to their surprise and shock, they found a six-foot long crocodile lying on the road.

The Police immediately brought it to the notice of the Mysuru Zoo night staff, who in turn informed the Zoo Executive Director C. Ravishankar. He rushed to the spot along with his staff and spread a net on the crocodile. Before that they threw a cloth on the eyes of the crocodile and trapped it in the night.

“We released the female crocodile into Gende Hosahalli forest island near Srirangapatna. The crocodile must have strayed from Karanji Lake. There are nearly 12 crocodiles in the Lake,” said Ravishankar speaking to Star of Mysore.

Luckily, the Garuda night patrol team found the crocodile in the middle of the night lying on the road. If only it was still lying there early in the morning then the early morning walkers and joggers on this lovely stretch of road, would have been in trouble as they could have accidentally stepped on it.

“This road is not well lit as there are hardly any street lights,” said Ganesh Rao, a resident of Siddhartha Layout who is also a morning walker.

Crocodile in Kuppanna Park: It may be recalled that a healthy two-year-old male crocodile was found in Kuppanna Park just two weeks ago (Oct.11), where the Flower Show had just concluded.

The Forest officials had rescued the reptile and released into Gende Hosahalli forest island near Srirangapatna.

2 COMMENTS ON THIS POST To “Now, crocodile spotted on Thandi Sadak Road”