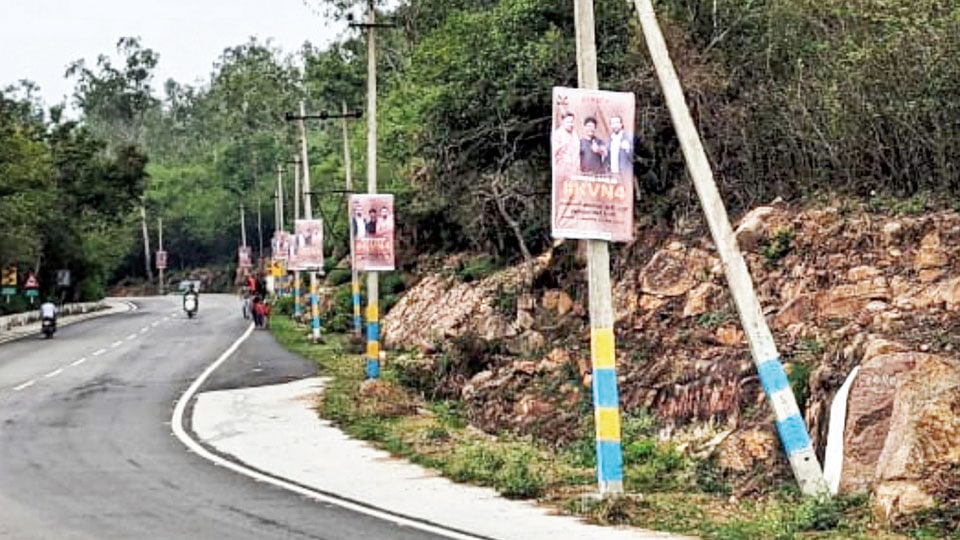 Mysore/Mysuru: At a time when concerned citizens of Mysuru are putting up a united fight against the proposed ropeway project atop the Chamundi Hill in their efforts to save the Hill from defacement and destruction, the menace of flex banners have surfaced on the road up the Hill.

Yesterday, the Muruhat of a Kannada movie was done atop the Chamundi Hill and the film hero Dhruva Sarja and Director Prem along with his wife Rakshitha Prem had come to pray to the Goddess and launch the movie production. A small procession too was held up the Hill to mark the occasion.

In their enthusiasm to promote the movie, the film-makers and fans of the actor put up hundreds of flex banners on the electric poles by the side of the road leading up the Hill. Though the event was over in an hour or so, the flex banners have not been removed.

Morning walkers and regular motorists called up Star of Mysore this morning and expressed their anguish on the defacement. They have demanded action against the persons who erected the flex banners. “The posters have been fixed right from the foothill to the top of the Hill. This is uncalled for and moreover, the posters have been abandoned after the event,” said S. Shylajesha, a nature lover and a wildlife photographer.

“If the boards are not removed, it will fall and the entire route will be filled with them and there will be no one to clear the same. The banners will be an eyesore and will ultimately result in heaps of waste in a serene environment. Such activities must not be allowed on the Chamundi Hill where thousands of people come to pray and be amidst nature. This will set a bad precedent and tomorrow someone else will put up bigger banners,” he added.

Several other walkers too expressed shock over the incident and demanded that the Forest Department take action against spoiling the natural beauty of the Chamundi Hill.