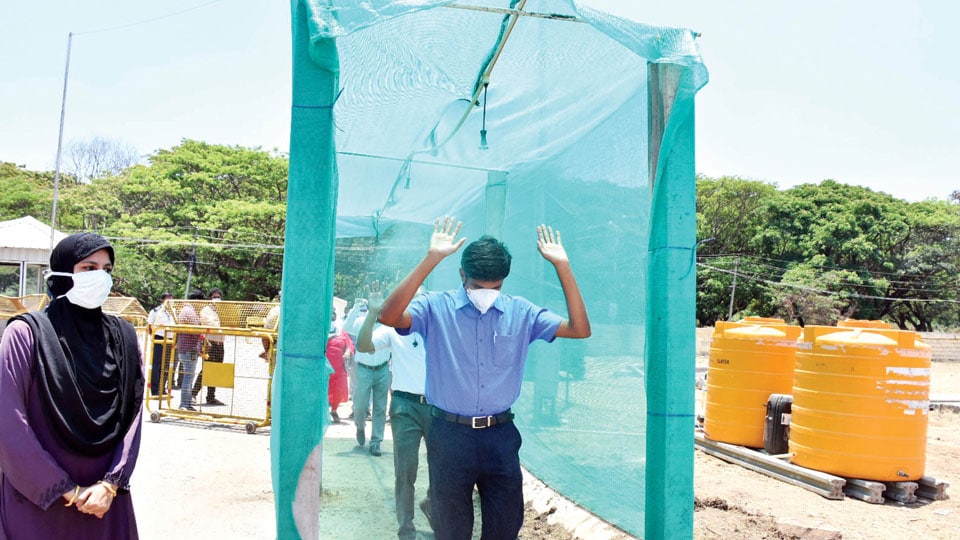 Now you cannot pick up vegetables without sanitising your hands

Mysore/Mysuru: To make sure that people do not miss out sanitising their hands before picking up their vegetables, a Disinfection Tunnel or Pathway was set up at the entrance of the temporary Vegetable Market in city yesterday.

With thousands of people visiting the market every day, the process of sanitising to contain the spread of COVID-19 had become a herculean task for authorities. To address this, the locally designed low-cost disinfection mechanism, set up by a city-based team led by Ramesh Kikkeri that included Dr. Nagaraj, Dr. Praveen and Hanumantharaju, was installed at the new Vegetable Market at Dasara Exhibition Grounds in city.

It utilises less water and Sodium Hypochlorite (commonly referred to as bleach). Individuals must pass through the tunnel with their palms raised. The sanitiser, which is affixed to the roof of the Tunnel will sprinkle the disinfectant by a fully automatic process.

Clarifying that Sodium Hypochlorite is harmless, MCC Health Officer Dr. D.G. Nagaraju said: “The Bleach, which is used in Swimming Pools too, does not affect the skin. As swimmers will be in the pool for hours, at times they may feel burning sensation in their nose or eyes, but a person will hardly need 8-10 seconds to pass through this Disinfection Tunnel that is 2.5 mts in length and 4 ft in width.”

“Two water tanks of 1,000 litres capacity are being used for this Tunnel. Sprinklers which pour out water in big droplets have been avoided and two sprayers which eject water in mist form are used to minimise the usage of water. The Tunnel utilised only 400 litres of water on day-1 yesterday,” he said informing about the mechanism.

“The Tunnel will be functional from 5 am to 10 am and 6.30 pm to 11.30 pm when the Market will be visited by sellers and buyers alike. Similar Tunnel will be set up at Lalitha Mahal Grounds and there are proposal to set up such Disinfection Tunnels at K.R. Hospital and DC Office which is cost-convenient and effective at places where more number of people visit,” he said adding that the water tanks are  provided by MCC and mechanism is set up by the team.