Mysuru: Even as the samples collected from the dead pelicans at Kukkarahalli Lake in city and Kokkare Bellur in Mandya district tested negative for avian influenza and found that it was due to acute parasitic infection, another pelican has fallen ill in Mysuru on Dec.13 and it has been sent to Institute of Animal Health and Veterinary Biologicals (IAH&VB), Bengaluru.

Deputy Conservator of Forests V. Yedukondalu, speaking to Star of Mysore on Friday said that since they did not want to take any chances, the bird has been sent to Bengaluru lab for testing. “We are not sure whether the sample will also be sent to Bhopal for further testing. However, it has already been confirmed that the death of two birds in Kukkarahalli Lake and Kokkare Bellur earlier was due to gastroenteritis caused by contaminated water,” he said.

Asked what measures the Forest Department was taking to contain the death of birds, he said that the University of Mysore Horticulture Department had already been instructed to clear the Lake of plastics and to keep the surroundings clean.

“If anything is required from the Forest Department, we are willing to join hands with the University and take up sanitation measures like fumigating the Lake area. We are also in touch with the Veterinary Department doctors and asked them to keep checking the birds for any sign of avian flu,” said Yedukondalu.

Deputy Director of Animal Husbandry and Veterinary Services Dr. Prasad Murthy told SOM that both the dead birds had tested negative. “The University staff at Kukkarahalli Lake spotted another pelican falling sick and brought it to our notice and we found it ailing. Hence, as a precautionary measure we have sent it to Bengaluru lab for testing,” he said. 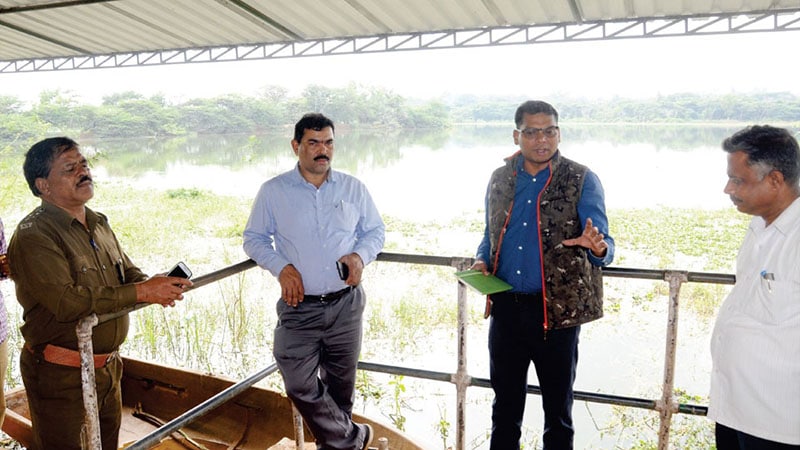 A file photo of DCF V. Yedukondalu (second from right) during his visit to Kukkarahalli Lake recently.

Prof. K.M. Jayaramaiah, Non-Official Member, Karnataka Lake Protection and Development Authority, said that there were nearly 200 spot-billed pelicans at the Lake and many of them were old. They are migratory birds and some of them stay back while a few fly away.

“The pelicans falling sick could be due to virus, bacteria or worms. The E-water Harmonizer, an American technology, had been installed at Kukkarahalli Lake, which enhances the dissolved oxygen level. As a result, the foul smell in the Lake had reduced. Hence, we have to take more such measures,” he said.

“Kukkarahalli Lake is home for a wide variety of aquatic species, rare birds including Pelicans and Tarters that have been mentioned in the “Red Data Book” as they are endangered species and it requires high-priority measures to save them from extinction. Harming their habitat is an offence under Wildlife Act,” opined D.H. Tanuja, an avid bird-watcher and environmentalist. She questioned: “This unbridled letting out of sewage into the Lake is an offence too. Now who will be held responsible? Or who will own up? Is it the University of Mysore or the Mysuru City Corporation?”