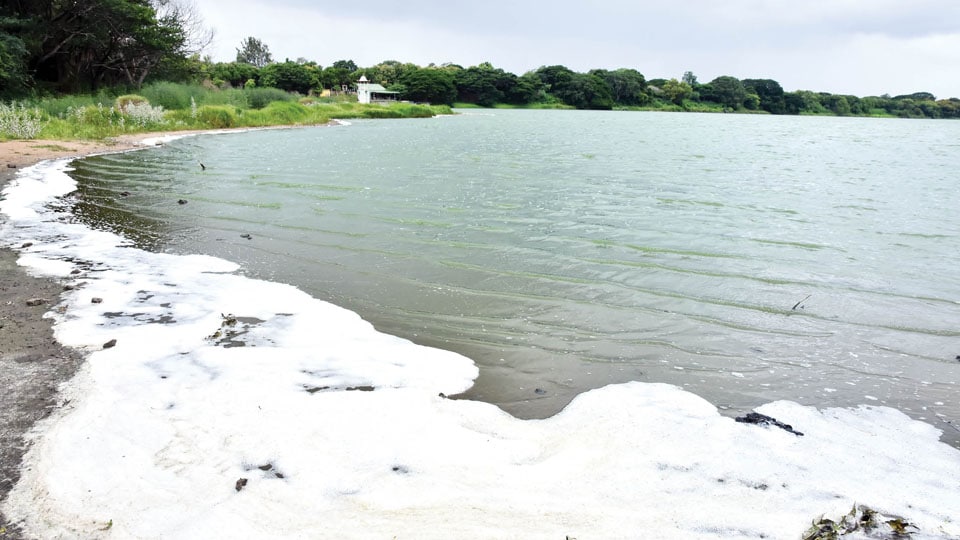 Mysuru: Namma Mysuru’s failure in managing waste and lack of proper sewage management plan explain incidents of frothing at the iconic Kukkarahalli Lake, an inspiration to many writers including our Poet Laureate Kuvempu.

Lakes frothing and risking the health of entire neighbourhoods — Mysuru is seeing this now, thanks to break-neck construction, poor urban planning and indiscriminate disposal of solid waste and sewage, choking water bodies.

The Bellandur Lake in Bengaluru is famous or rather infamous for spewing waves of froth and thick foam that usually spill onto the roads and carried by winds, blanketing cars and leaving neighbourhoods with a severe stink. Environmentalists have warned that if immediate corrective measures are not taken at the initial stages now, the Kukkarahalli Lake will turn into another Bellandur Lake.

The Kukkarahalli Lake emitting white lather was noticed yesterday by regular morning walkers. The froth was seen at the borders of the Lake washing ashore. Following the shocking development, samples have been collected and sent to Laboratories for tests.

Interestingly, the Karnataka State Pollution Control Board (KSPCB) had registered criminal cases against the Mysuru City Corporation (MCC) and Mysuru Urban Development Authority (MUDA) for being unable to stop the flow of sewage into the Kukkarahalli Lake. But the case is still in the initial “investigation stage”.

A large quantity of froth-filled sewage and wash water from the residential areas of Paduvarahalli and Jayalakshmipuram, Vontikoppal and daily discharges from nearby service stations and hospitals flow into the already polluted Lake. As the sewage is entering the Lake in an uncontrolled manner, the concerned morning and evening walkers have long been complaining of foul smell that is emanating from the Lake.

Experts had often pointed out to a huge amount of sewage flow into the Lake due to the failure of MCC to manage the sewage of the city. They pinpoint that the ubiquity of washing machines and indiscriminate use of detergent by households have come together to choke the Kukkarahalli Lake, threatening the lives of aquatic, land and bird species that thrive in the Lake precincts.

Following the spouting of whitish lather, Deputy Commissioner Abhiram G. Sankar directed the Pollution Control Board to collect samples and send them for tests. Accordingly, officials visited various corners of the Lake yesterday, collecting samples. Officials said that the Lab reports will be sent in 10 days that will determine the cause of the froth.

“It is for the first time the incident of the Lake spewing froth has been reported and we suspect uncontrolled discharge of sewage into the Lake as the reason for the froth. We have to wait for 10 days for the Lab report to determine the exact cause. Meanwhile, if it rains heavily, the froth content will dilute,” said B.P. Geetha, Environment Officer, KSPCB.

Environmentalists have suspected that sewage water is flowing from surrounding areas through the magic box on the on the Hunsur Road. Ironically, the magic box was constructed last year for the rainwater to flow smoothly from Jayalakshmipuram, Paduvarahalli and surrounding areas into the Lake through gravitational force. Instead, it is carrying sewage.

Green activists have demanded the regular flow of fresh water into the Lake. “Already there is a Rs.50 crore pilot project to supply water from KRS Dam backwaters directly to 13 lakes in Mysuru including the Lingambudhi Lake where water will be supplied from backwaters through pipelines. The same project can be extended to Kukkarahalli Lake,” said nature lovers.

Sewage is the main source of pollution of this water body and the contaminated water contains variable amounts of heavy metals that lead to increase in concentration of metals in the soil and vegetation. Filling the Lake with fresh water will infuse life into the lake, they opined.

Green activist and Wildlife Warden Krithika Alanahalli said that if the froth and sewage flow is not curtailed immediately, it will threaten the very existence of the bird, fish and animal species.

Reacting on the issue, Deputy Conservator of Forests Dr. K.C. Prashanth Kumar said that the University of Mysore (UoM) is the custodian of the Lake and as such, the Forest Department do not have much say on the lake maintenance and flow of sewage water. “I appeal to the District Administration and the Mysore University to save the precious flora and fauna of the Lake that is one of the important lung spaces of Mysuru city,” he said.

The UoM, however, has denied the flow of sewage into the lake. “Sewage flow has been stopped now. Earlier, gallons of sewage water used to flow into the Lake from Jayalakshmipuram, Paduvarahalli and surrounding areas. As soon as the issue came to our notice, we stopped the sewage flow,” said Registrar Prof. Lingaraja Gandhi. Steps are being taken to infuse fresh water into the Lake, he added.