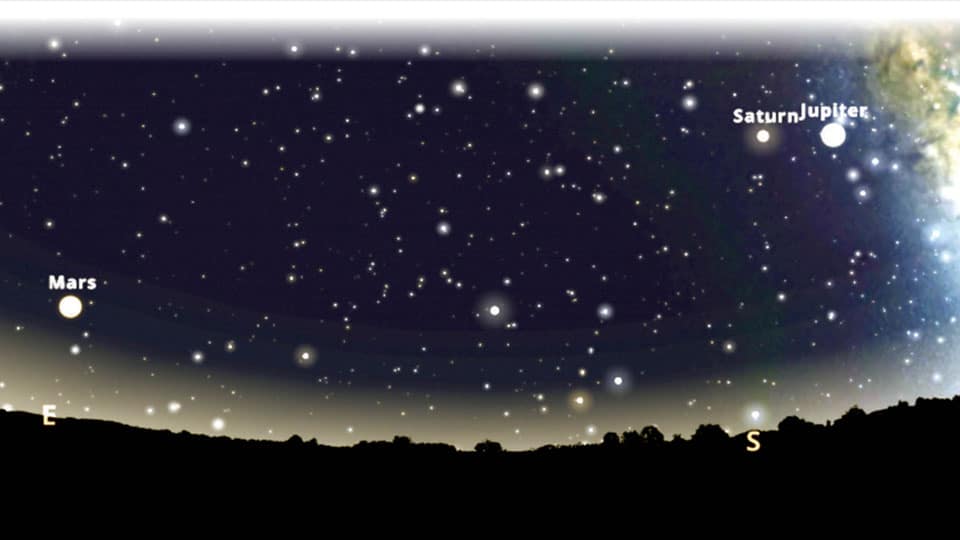 Opposition of Mars – 2020: Best viewing time of the planet

Mars, the most celebrated and debated planet, is impeccably detectable with the unaided eye. The features of Mars are encomiastic and have been explored in great detail by the Viking Space Mission.

Mars reaches “opposition” on Oct. 13 and so it has its best conspicuousness for a few months. The specialty of this astronomical happening is that, Mars, the red planet, becomes more striking. On that day, the planet will be closer to earth. Throughout the night, Mars is discernible and more resplendent. Presently, Mars is noticeable in the south-eastern direction at 8 pm.

‘Opposition’ is the astronomical occurrence when a planet farther from the Sun than Earth appears opposite the Sun. This implies, Sun-Earth-planet is in a straight line. This is when the planet is about as close as it can get to Earth, so it is biggest and brightest. Rightfully, this is the best time to observe a planet.

READ ALSO  Heavenly visitor ‘NEOWISE’ at its best this month

The 2003 Opposition was the closest approach in almost 60,000 years! Mars’ orbit is more elliptical than Earth’s, so the difference between perihelion and aphelion is greater. Over the past centuries, Mars’ orbit has been getting more and more elongated, carrying the planet even nearer to the Sun at perihelion and even farther away at aphelion. The red planet came within 34.6 million miles (55.7 million km) of Earth, closer than at any time in over nearly 60,000 years! So future perihelic Oppositions will bring Earth and Mars even closer. 2003 record will stand until August 28, 2287!

At this October’s Opposition, Mars’ southern hemisphere will be tilted towards Earth. When it comes to observing around Opposition, telescopes will show us obscure and light regions on Mars’ disc. These ‘albedo’ features are distinguishable because of variations in reflectivity. The lighter regions normally represent desert areas, while the darker regions are exposed rock. In addition, the planet’s polar caps shine bright. The South Polar Cap (SPC) should govern our view, but as it’s well into the southern summer, this will have shrunk to a fraction of its full size, the residual ice cap faintly offset from the planet’s axis of rotation.

READ ALSO  Heavenly visitor ‘iwamoto’ at its best this month

Binoculars will not reveal much more Martian feature than we notice, the planet appearing as a small, bright, salmon pink disc against a background star field. With a telescope, the changes to Mars’ appearance in the run up to Opposition become very palpable. The planet’s largest apparent size occurs when it is closest to Earth and this typically occurs a few days adrift of the Opposition date. It’s not exceptional to see a pink fuzzy splotch at first, but give yourself time to settle into the view and you’ll gradually see more.

From Mysuru, this planet can be noticed from 7 pm to 5.30 am and can be seen in the south-eastern direction.