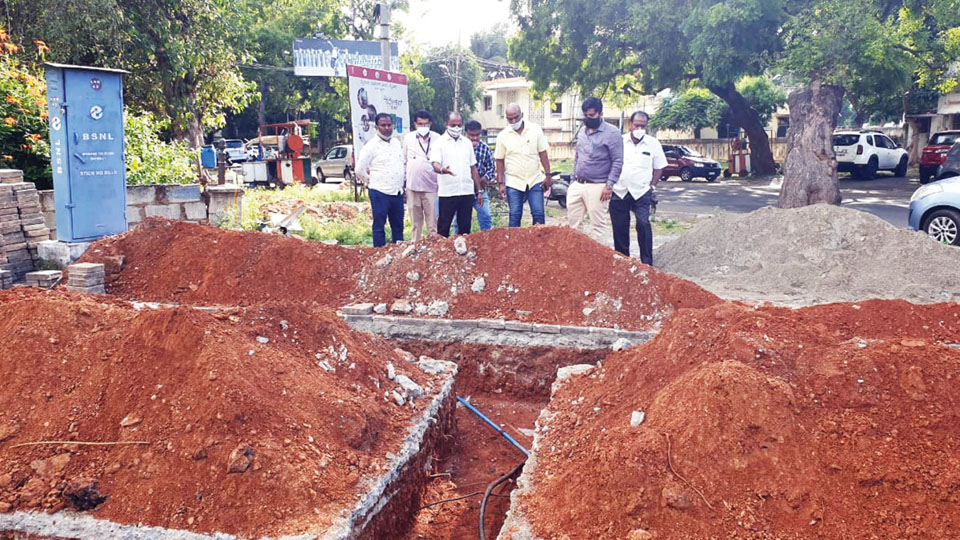 Mysore/Mysuru: Following objections from the public over the construction of a toilet complex by the Mysuru City Corporation (MCC) near Ramaswamy Circle, the members of MCC Town Planning Standing Committee (Works Committee), who conducted a spot inspection yesterday, have decided to shift the toilet complex to another spot.

The toilet complex was being constructed by MCC near the traffic signal on JLB Road and Rs. 20 lakh was being spent for the construction. This had invited objections from the public, who  said that once the toilet is open for public use, people would park their vehicles on the ever busy road to use the toilet, thus hampering the smooth flow of traffic. Also, the toilet complex  so nearby to Ramaswamy Circle will mar the beauty of the road, as Ramaswamy Circle has a great history.

Mysore Grahakara Parishat (MGP) Member K.S. Narasimha Murthy too had expressed displeasure over the toilet complex construction by posting the picture on social media, where he had stated, “Mysuru has its own beauty and has gained many titles such as Heritage City and Cleanest City among others. The MCC, which should work towards protecting the dignity of city, is working towards spoiling the beauty of the city. A public toilet is being constructed near historical Ramaswamy Circle, connecting from JLB Road and Jayalakshmi Vilas Road (Court Road). This is not a good idea, as it will create traffic issues. There is 20-30 feet open space available near Jayalakshmi Vilas Road, I prefer MCC to utilise this place to construct toilet instead of spoiling the beauty of Ramaswamy Circle.”

Manjunath, speaking to SOM, said that there were objections from the public over the construction of the toilet complex adjacent to the footpath. The matter was discussed with Corporator Lokesh Piya and a spot inspection was held. The Corporator has given his consent for shifting the toilet complex.

Manjunath added that Corporator Lokesh has said that the construction of the toilet complex would be shifted to a suitable place which will be 20 feet behind the present spot.