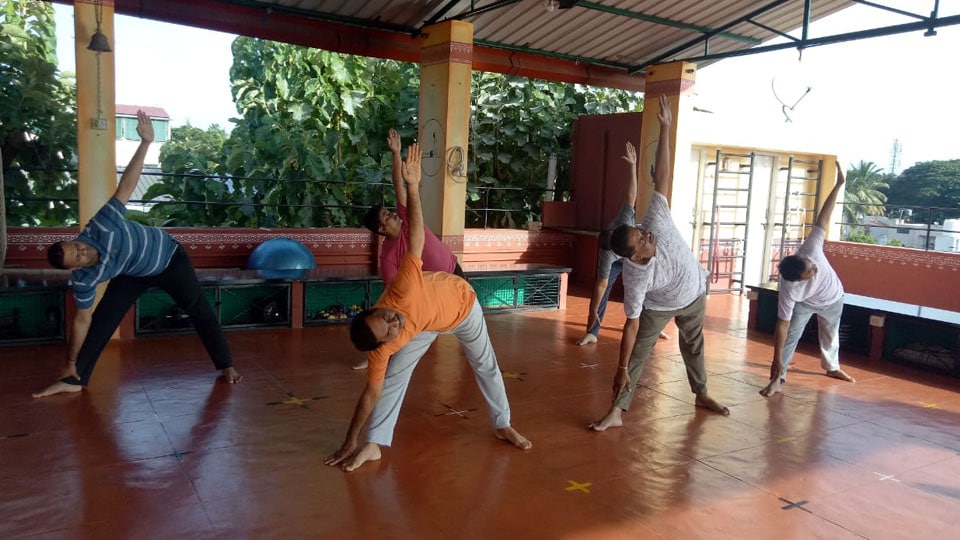 Over 1 lakh to perform Virtual Terrace Yoga on June 21

Drone cameras to film performances; photos can be uploaded on AYUSH website

Mysore/Mysuru: Till last year, International Yoga Day (IYD) that is celebrated on June 21 used to be a group activity on a large scale, but this time COVID-19 guidelines of social distancing have changed the way the event is being observed. This time, the theme for the day says it all: ‘Yoga at home, yoga with family.’

For the first time, since its inception in 2015, there will be no mass gathering at centralised places for group yoga. To mark the day and engage more people, Government authorities and different yoga associations have opted for virtual yoga and in Mysuru, it will be Virtual Terrace Yoga.

Since the United Nations passed a resolution to celebrate June 21 every year as International Yoga Day, there has been a manifold increase in the number of yoga enthusiasts. COVID-19, however, has driven people to include breathing exercises in their daily lifestyle to boost the immune system to fight the pandemic. Yoga has turned out to be one of favourite fitness regimens during the lockdown.

Yoga enthusiasts can perform the activity inside their houses and on their terraces from 7 am to 7.45 am tomorrow. “While children, pregnant women and the elderly can perform Yoga inside their houses, others can get on to the terrace and do Yoga,” Mysuru Deputy Commissioner Abhiram G. Sankar said at a press conference held at his office yesterday. He added that there will be no opportunity for a large gathering at any given place.

Last year on the International Yoga Day, over 80,000 people had gathered at various places to perform the activity as per the protocol. This year, however, as there will be no travelling to Yoga venues and as people will perform Yoga at their homes, we are hoping to see a participation of more than 1 lakh people, he said.

Yoga performances in Mysuru will be recorded and filmed through drone cameras. “Earlier it was decided to hire a chopper to film Virtual Terrace Yoga. But considering huge expenses, it has been decided to use drones to film the activity,” he said.

Also, Yoga enthusiasts can take the photos of Yoga performance inside their houses and  on the terraces and upload the same on AYUSH Department’s website (yoga.ayush.gov.in). Certificates will be issued by the AYUSH Department to the e-mail addresses of those who upload the photos.

A CD containing a 45-minute Yoga performance was released at the District Health Office so that household members can follow instructions to perform Yoga and avail benefits. The CD, released by DC Abhiram G. Sankar, has been brought out by Government Nature Cure and Yoga Medical College, Mysuru and it contains simple Yoga exercises based on Common Yoga Protocol as prescribed by the Ministry of Ayurveda, Yoga & Naturopathy, Unani, Siddha and Homoeopathy.