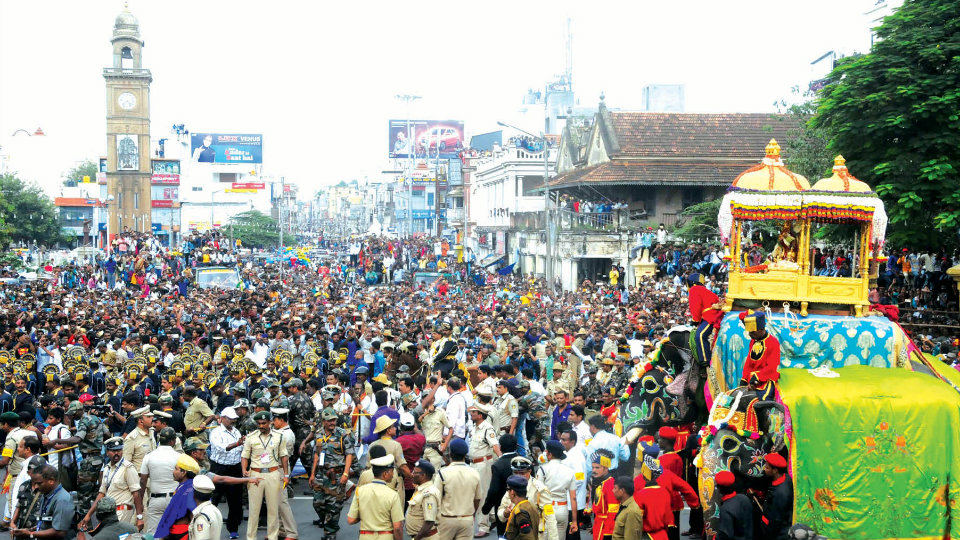 Mysuru:  Even as the world famous Mysuru Dasara festival concluded with Vijayadashami procession on Friday, it is estimated that over 35 lakh people took part in the 10-day celebrations.

Speaking to SOM on the success of Dasara, District Minister G.T. Devegowda (GTD), who played a keyrole in ensuring success, said that Dasara passed off peacefully without any untoward incident. Attributing the success to the blessings of Goddess Chamundeshwari, GTD thanked all the political parties for extending their co-operation.

Expressing happiness that lakhs of people took part in Dasara, the Minister said that according to an estimate, over 35 lakh people from across the State and country participated in the 10-day fest. Thanking the people representatives, officials and all other stakeholders in the grand success of Dasara, he maintained that Dasara was a success even at the hobli-level.

Referring to the absence of Congress leaders during the festival, he said that some Congress leaders have expressed their disappointment over Dasara pass issue and non-appointment to various Dasara Sub-Committees. But the fact is that officials had issued passes like in the past. But some leaders could not take part due to their involvement in By-polls, he said.

Pointing out that many Ministers including Dy.CM Dr. G. Parameshwara, U.T. Khader, Zameer Ahmed Khan, Rajashekar Patil, Dr. Jayamala, R. Shankar and M.C. Managuli had attended Dasara, GTD maintained that there was no question of any disappointment in the Cabinet.

Noting that every Minister and other people representatives have their own responsibility during Dasara, he reiterated that all stakeholders have their fair share in the success of Dasara.

Referring to the confusion during Vijayadashami procession, when howdah-carrying elephant Arjuna marched amidst folk troupes and tableaux in break of tradition, the Minister said the procession got late as there were tableaux and troupe taking part. However, as it was getting late, the howdah-carrying  elephant was allowed to leave the Palace after Goddess Chamundeshwari was showered with flowers in the auspicious time. As the howdah-elephant was to leave the Palace in the auspicious time, some folk troupes which were yet to leave then, followed it and there was nothing much ado about it.

Mentioning that Chief Minister H.D. Kumaraswamy and all other Ministers in his Cabinet had extended their full co-operation, he said that erstwhile Royal family member Pramoda Devi Wadiyar had extended total support. However, it was really sad that Pramoda Devi Wadiyar’s mother and sister-in-law passed away on Vijayadashami day, he said and added that he had prayed the almighty to give strength to royal family members to bear the loss.

Tourism Minister S.R. Mahesh, who is from the district, said that Dasara festival should be celebrated as a National festival in the future. Sharing his joy on the success of Dasara with SOM, S.R. Mahesh said that he has made this appeal to Union Civil Aviation Minster Suresh Prabhu when he visited the city for Dasara.

Giving details about his discussion with the Union Minister, Mahesh said that he had discussed issues pertaining to the State such as Mysore Airport expansion and upgradation, coffee and tobacco grower problems etc. to which the Minister has responded positively.

Pointing out that extensive coverage by media had resulted in more footfalls for all Dasara events, he noted barring a very minor incident during Vijayadashami procession, all the Dasara events drew huge crowds, thus ensuring total success of the ten-day festival.