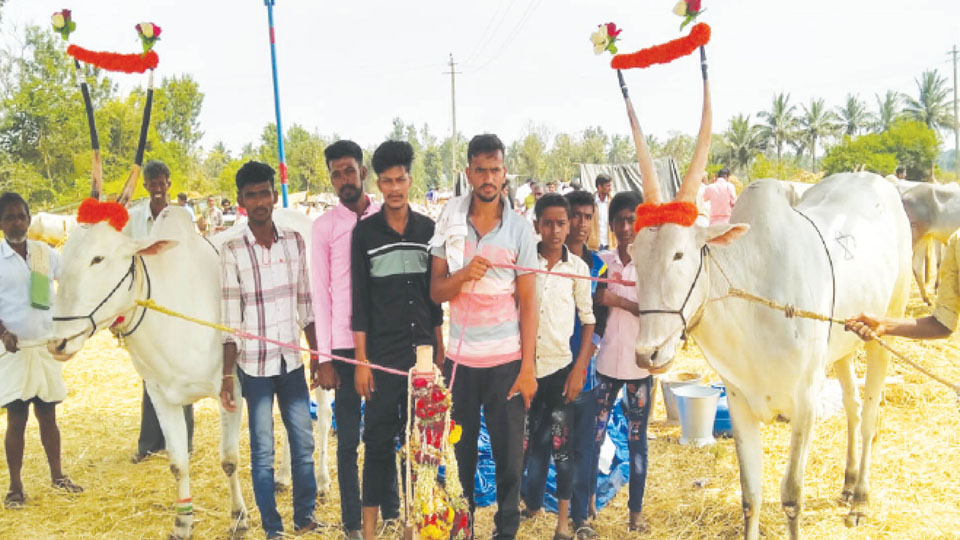 Bettadapura: Cattle owners are arriving in large numbers along with their decorated cattle to display and sell them at Bettadapura Sri Sidlu Mallikarjunaswamy Cattle Fair in Periyapatna taluk.

Yesterday, oxen were sold for Rs. 5 lakh a pair and the major attraction at the cattle fair were the oxen with six teeth, reared by Madegowda of Kelaganahalli Doddekoppal near Bettadapura. Farmers from various places are visiting the fair to buy their choice of Hallikar breed cattle.

Farmers from Hassan, Kodagu, Chamarajanagar, Mysuru and Mandya districts are displaying and selling their cattle at the Jatra which has a history of hundreds of years. As the prices of cattle has skyrocketed, rearing a pair of cattle has become very costly and hence, many farmers are opting for modern agriculture methods, while farmers who are rearing cattle are arriving to the Jatra and performing seva by climbing Sidlu Mallikarjunaswamy Betta. As the cattle fair at Chunchanakatte was not held for many days, cattle owners are bringing their cattle to Bettadapura Cattle Fair and are selling them.