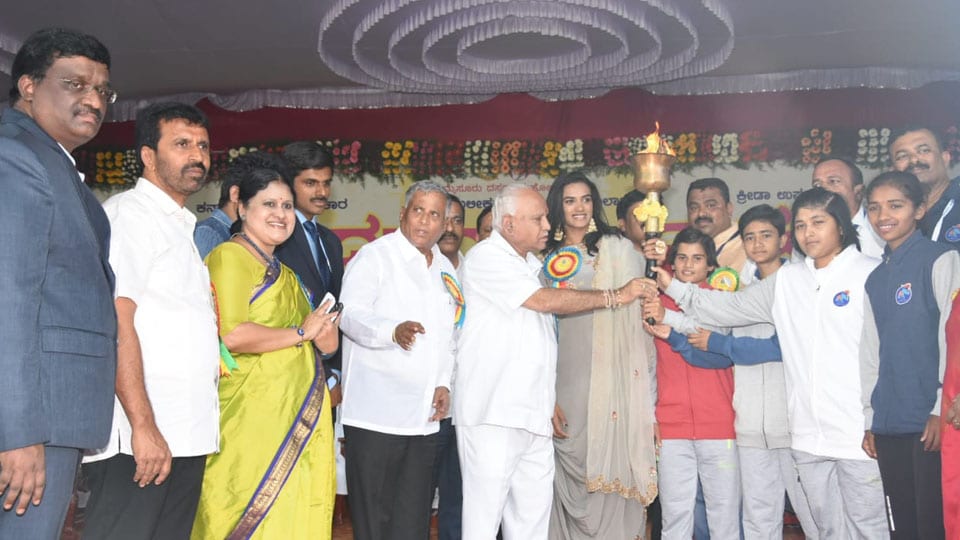 The Meet is organised by Dasara Sports Sub-Committee in association with the Department of Youth Empowerment and Sports and Karnataka Sports Authority.

The inauguration was followed by a march-past in which sports persons from Mysuru, Bengaluru Urban, Bengaluru Rural, Belagavi, Kalaburagi and students of Mysuru Sports Hostel took part.

Maintaining that Sindhu is a model to budding sports persons, the CM wished Sindhu for winning the Gold Medal in the 2020 Olympics.

Noting that even the Rain Gods seemed to have blessed Sindhu for winning Gold Medal in Olympics, Yediyurappa said that Dasara is an emotional event for crores of Kannadigas, with the Festival being celebrated as Nada Habba.

Rains began to pour when Sindhu began her speech.

Beginning her address in Kannada by saying Yellarigu Namaskara? Hegiddeeri?, Sindhu said that this was her first visit to Mysuru and Mysuru very much deserved the cleanest city tag. Thanking her parents for the support extended to her, she called upon the parents to encourage their wards to take part in sports.

She further said that relentless practice was key for achieving excellence in sports.