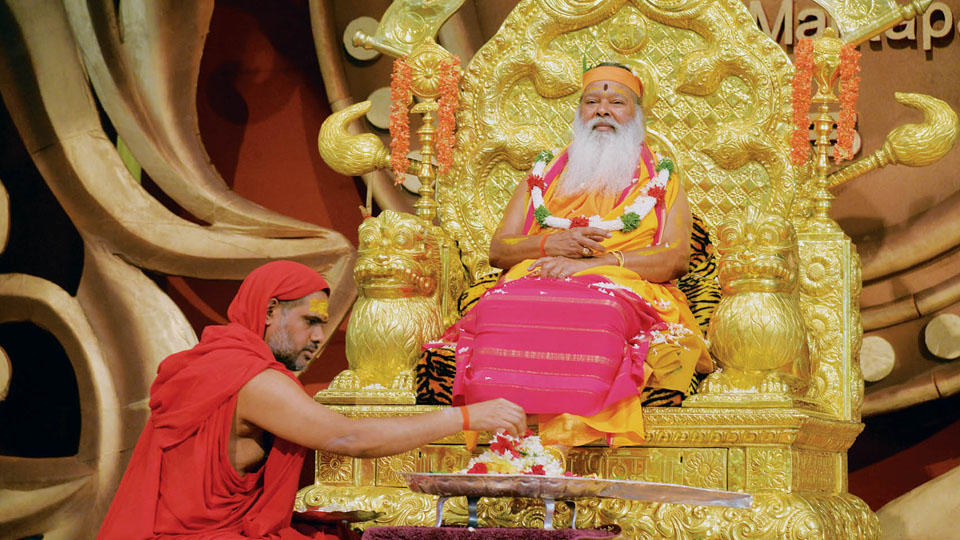 Mysuru:  Goa Panchayat Minister Mauvin Godinho, who presented an idol of Ganapathy to Sri Ganapathy Sachchidananda Swamiji on his 76th birthday celebrations here at the Ashrama premises on Nanjangud-Ooty Road  this morning, described the Swamiji as the best human being in the world.

Godinho, who had come all the way from Goa to seek the blessings of the Swamiji said, “I am truly blessed to be in the presence of such a fine human who is internationally renowned for his compassion and love. The Swamiji has divine powers and it has come to him through years of devotion, dedication and penance.”

Replying to the felicitation, the Swamiji said, “It is not I who celebrate my birthday. It is the people’s birthday which I celebrate every year. If one is curious to understand what Pada Puja is all about which is performed for me every year then one needs to read Guru Geetha which is available in all languages to understand its deeper meaning.”

He lauded Nagapani Sharma for rendering Sahasranama in Sanskrit and describing it in Telugu. “People ask me whether I am a spiritual thinker, musician or an artiste and my only reply is ‘I am your best friend,’” he said to the loud applause of thousands of devotees.

Two CDs titled Divya Namamruta and Kalatraya Raga Sagara were released on the occasion by Godinho and Telugu Film actor Dr. Rajendra Prasad who was also conferred the Kalanidhi award by the Swamiji.

Former Mayor Narayan presented a banner depicting the Maramma Temple for Dalits built in Bannimantap. “This is the 15th Maramma temple built for  Dalits by the Swamiji and he is going to inaugurate it on June 15. On the occasion, mass marriage for 500 couples will also be held,” said Narayan.

This afternoon, All India Datta Jnana Bodhi Sabha will be held where the Trustees of 80 branches of Datta Peeta Ashramas in the country and 18 branches abroad will present the annual report for the year 2017-18.

In the evening there will be a cake cutting ceremony followed by presentation of Guinness World Record for stamp collection. Nearly 6,000 devotees from all over the country and abroad are participating in the week-long celebrations.