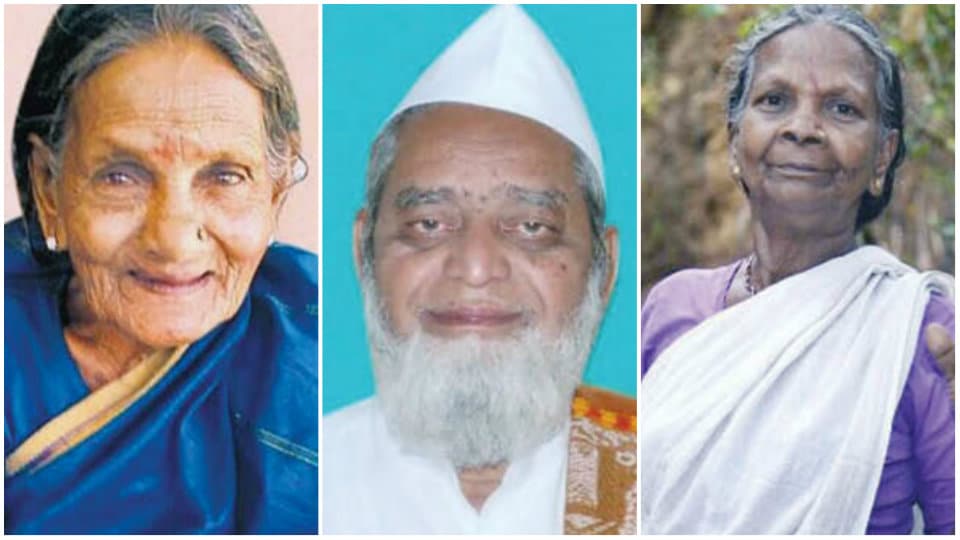 This year’s list of Padma awards announced on Thursday last, a day before the Republic Day had some pleasant surprises. Normally this list consists of cricketers,  movie stars, other sportsmen and people who are favourably dispensed towards the ruling party. A Lutyens hang around. This year a total 85 awards were announced of which three were for Padma Vibhushan, nine Padma Bhushan and the balance of 73 Padma Shris. Since an asean meeting had been called on the eve of the Republic Day, a Padma Shri was conferred on one member of the asean. The Home Ministry had announced that they had received a total of 15,700 applications and recommendations !

This year’s Padma list for a change had some “unsung heroes.” A 99-year-old warrior of the poor, a 97-year-old midwife from Karnataka, a 90-year-old Monk-Physician and a 75-year- old grandmother of the jungle. Just look at their ages. In spite of the fact that these people are legends on ground, their work had not been recognised by the government all these years.  But better late than never. These real people do not crave for awards but work tirelessly on their own turf, year after year.

Now let us have a peek into the history of some awardees:

Murlikant Petkar: A war hero who went on to become India’s first paralympic gold medallist, this soldier lost an arm in the 1965 Indo-Pakistan war with a bullet lodged in his spinal cord. He won the gold in 50m free style swimming event, with a world record timing of 37.33 seconds!

Vijayalakshmi Navaneethakrishnan: Acclaimed Tamil folk exponent with a lifelong devotion to research and collection of ancient Tamil folk songs and dances, she has authored 11 books on the above subject and has recorded 10,000 plus audio cassettes of folk tribal music.

Arvind Gupta: An IIT Kanpur alumni, this gentleman chose to devote his life to education. Over decades, he has travelled to 3,000 schools, has made 6,200 films on toy-making from trash in 18 languages and provides free books on his website.

Sulagatti Narasamma: A farm labourer providing mid-wifery services in backward regions of Karnataka, she has a special talent of checking the baby’s pulse in the womb, position of head and baby’s health etc. She does all these free in spite of the fact that she herself is poor! She has been conferred with an honorary doctorate by Tumkur University.

Yashi Dodhen: A Monk-Physician who is foremost expert in Tibetan herbal medicine, he is the founder of the Tibetan Medical College at Dharamshala. He has treated thousands of people with his unique medicines.

Subhasini Mistry: A poor lady from rural Bengal, she toiled for 20 years as a housemaid and daily labourer and sold vegetables in a cart to build the humanity hospital for poor in Hanspukur, West Bengal. The hospital has a capacity of 45 beds and treats thousands of patients year by year. Her son is now a doctor in the same hospital.

M.R. Rajagopal: He set up India’s first palliative care at Kozhikode and his effort is to make this affordable. He is considered among the top 30 Anaesthesiologists globally.

READ ALSO  It’s not what you gather, but what you scatter

Laxmi Kutty: A tribal woman who can prepare 500 herbal medicines from memory, she is the only tribal woman from her area who has gone to a  school. She still lives in a small hut with palm leaves deep in the jungle. She has helped thousands of people with snake and insect bites.

Ibrahim Sutar: This Kannada Kabir is another name from Karnataka chosen for this year’s award. He chooses to spread social messages through his bhajans from the last 44 years! He is an icon of Hindu-Muslim unity from Bagalkot.

Sitamma  Joddati: A 60-year-old former Devadasi from Karnataka, she has worked tirelessly for empowerment of Devadasis and Dalit women.

Do you know any one of the names I have enumerated above? The answer would be a big NO. They are famous in their areas of work but unknown otherwise. Today I was surprised to read about a Polio doctor from Delhi Dr. Matthews Verghese, who has suddenly become famous because Bill Gates mentioned him in his blog. I am sure there are thousands of deserving and unknown benefactors of humanity working selflessly all over India. Mr. Modiji, a beginning has been made. Let us hope that more and more of these deserving people get the recognition they deserve in the next year’s list too.