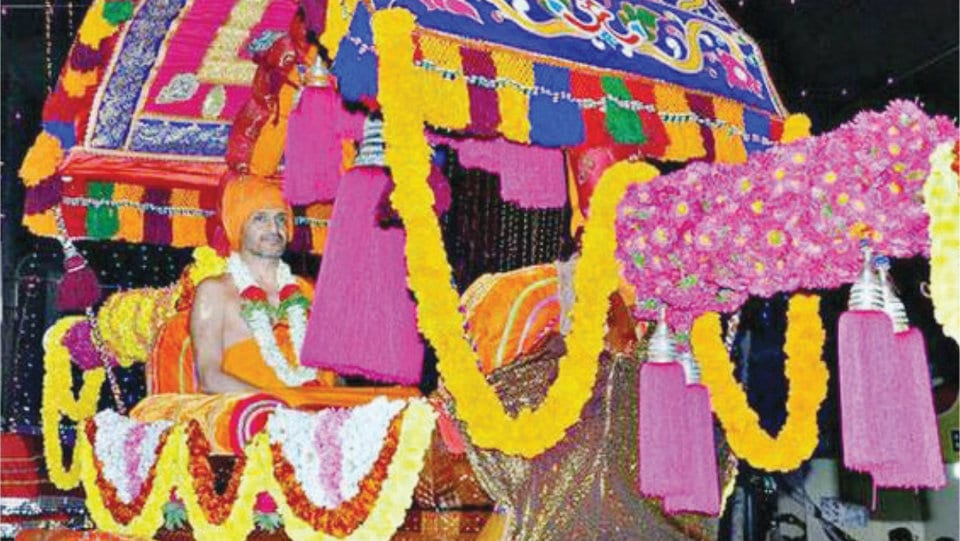 Udupi: Sri Vidyadheesha Theertha Swamiji of Palimar Mutt ascended the ‘Paryaya Peetha’, also called the ‘Sarvajna Peetha’, at the 800-year-old Sri Krishna Mutt (Temple) here yesterday. It will be his second Paryaya. Verses from the ‘Dwadasha Sthotram’ and the ‘Mangalaashtaka’ rent the air as Palimar Seer ascended the sacred Peetha.

The incoming Seer arrived at the entrance of the temple in a magnificent procession and had a glimpse of the presiding deity Krishna through the ‘Navagraha Kindi’ and prayed for the success of his two-year term.

The ‘Akshaya Patra’ or the perennial bowl and ‘Sattuga’ (laddle dating back to the times of Madhwacharya) and the keys to the sanctum sanctorum were also handed over to the incoming Seer. Outgoing Paryaya Seer Sri Vishwesha Theertha Swamiji of Pejawar Mutt then offered the sacred seat, ‘Paryaya Peetha,’ to Vidyadheesha Theertha Swamiji. 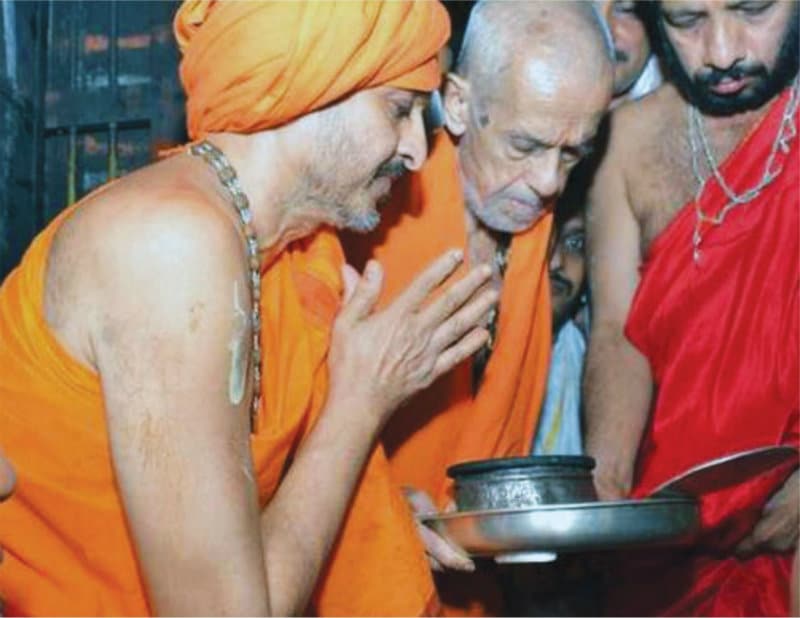 Sri Vishwesha Theertha Swamiji of Pejawar Mutt (centre) is seen
handing over the ‘Akshaya Patra’ and ‘Sattuga’ (vessel and ladle
dating back to the times of Sri Madhwacharya) to Vidyadheesha
Theertha Swamiji of Palimar Mutt, marking the formal transfer of
power at the Sri Krishna Mutt in Udupi, yesterday.

The Palimar Seer’s ascension gives him the right to worship Lord Krishna and manage the affairs of the Mutt for the next two years. The idol of Lord Krishna was installed at the temple by exponent of Dvaita philosophy Sri Madhwacharya about 800 years ago. The Seers of the Ashta Mutts propagate this philosophy.

Pomp and gaiety marked the ascension ceremony. Before the grand event, Sri Vidyadheesha Theertha Swamiji went to Danda Tirtha near Kaup, about 12 km from Udupi, and had a holy dip there at 2 am. He arrived at Jodu Katte at 3 am and was welcomed by a large number of devotees. A grand procession began from Jodu Katte at 3.40 am. Over 15 tableaux and 60 cultural troupes took part in the Paryaya procession. 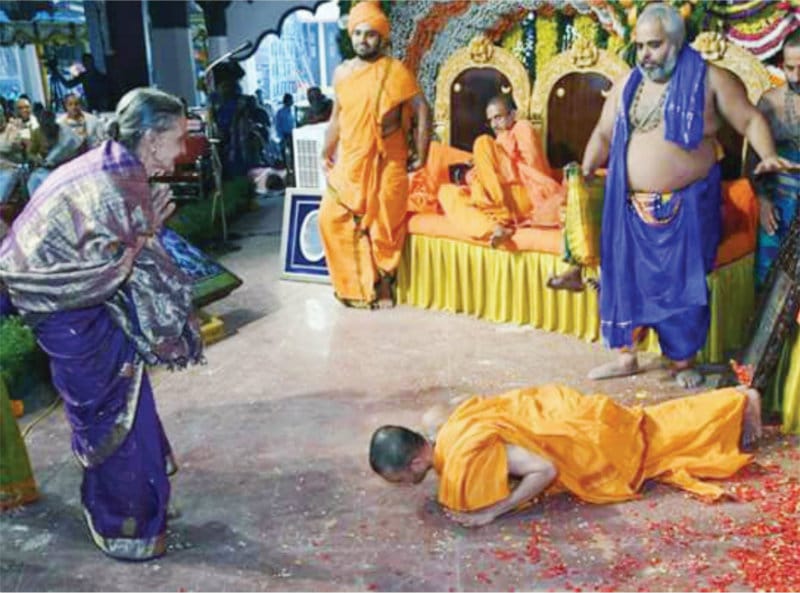 MAATHRUDEVOBHAVA: Sri Vidyadheesha Theertha Swamiji of
Palimar Mutt prostrating before his mother for her blessings
during Paryaya in Udupi yesterday.

Vidyadheesha Theertha Swamiji ascended the Paryaya Peetha at 6.35 am. The Seers of the other Ashta Mutts were felicitated at ‘Badagu Malige’. All the Seers then proceeded to participate in  ‘Paryaya Durbar’ at Rajangana, which was witnessed by a large number of devotees.